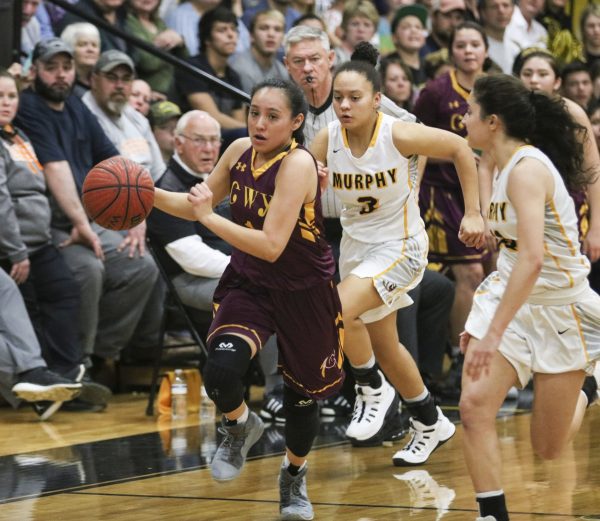 RUNNING: Cherokee’s Raylen Bark (#1) runs up court in the second half of a 1A state playoffs fourth round game at Murphy on the evening of Tuesday, Feb. 27. (SCOTT MCKIE B.P./One Feather)

MURPHY – The Cherokee Lady Braves (19-7) finished their 2017-18 season with a 55-32 loss at Murphy in the 1A West regional semifinals on the evening of Tuesday, Feb. 27.  Cherokee’s usual high-powered offense was hindered with shooting problems on the night.

“We improved so much from the beginning of the season,” Chris Mintz, Lady Braves head coach, told the One Feather.  “We started out 2-4 and won 17 out of our final 20.  That is something to be proud of.  These girls came to work every day and did their best.  Tonight was not our night, and we couldn’t buy a basket.  Tonight doesn’t take away from a great season.”

On the year, Cherokee was co-champions with Murphy for the Big Smoky Mountain Conference regular season title and they were runner-up in the BSMC tournament.

Tuesday’s game started slowly for both teams with the first bucket of the night coming at the 5:04 mark in the first when Murphy’s Aubrey Clapsaddle hit an inside shot.  Almost a minute later, Cherokee’s Timiyah Brown scored and got Cherokee on the board.  After the first quarter, Murphy led 14-8.

The second quarter was all Lady Bulldogs as they outscored Cherokee 17-3 to take a 20-point (31-11) lead into the locker room.

The third quarter was a close one with Murphy edging the Lady Braves 12-10 and taking a 43-21 lead into the final eight minutes.  The fourth quarter zoomed by and Cherokee was unable to close the gap.