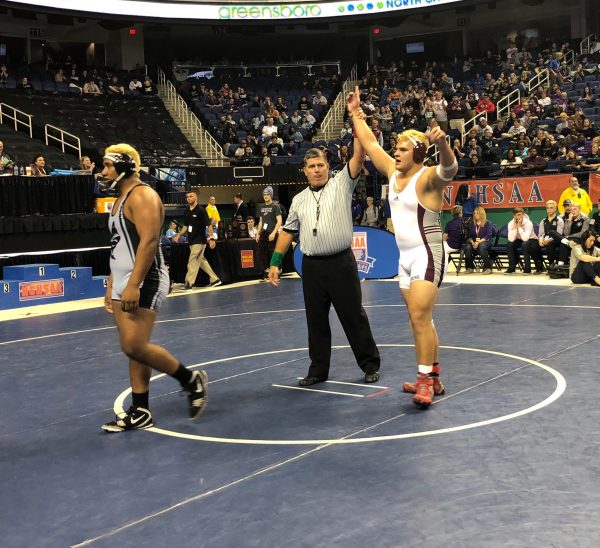 William Paul, an EBCI tribal member and senior at Swain High School, won the 1A state wrestling championship in the 220lb. division at the state meet held at the Greensboro Coliseum on Saturday, Feb. 17.  He won the state championship match with a pin of Freddie Romero of Robbinsville.

“This is all so surreal, I don’t know how to react yet,” he commented.

Paul won his semifinal match with a 4-3 decision over Paden Lungrin of North Stokes, and he won his quarterfinal match with a pin of KyVaughn Rome of Holmes. He ended the season with a 24-3 record with all three losses coming to Romero who he defeated to win the state title.

Paul began wrestling in eighth grade while attending Cherokee Central Schools.  Following the regular season, he wrestled free style and earned the Free Style state champion title earning himself a spot to wrestle on the national team representing North Carolina.  Through high school, Paul faced adversity in the form of injuries that kept him from getting time on the mat.  This year was a good year though and he moved up to the 220lb. division.

Upon graduation, Paul is set to attend the University of Alabama to pursue a physical therapy degree in the sports medicine field.