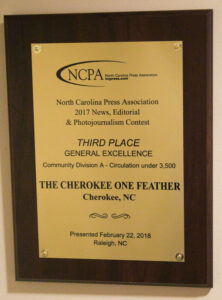 The Cherokee One Feather garnered a total of 12 awards in the 2017 North Carolina Press Association (NCPA) News, Editorial and Photojournalism and Best Advertising Contests including a third place plaque for General Excellence (Division A) which recognizes accomplishment in writing, photography, layout, and overall impact.  The awards were given during the annual NCPA Winter Institute held Thursday, Feb. 22 at the Raleigh Crabtree Marriot.

The awards were given for work between Oct. 1, 2016 and Sept. 30, 2017.  Robert Jumper, editor, and Scott McKie Brings Plenty, reporter, won second place as a team in the Best Community Coverage category.

Scott won in the following categories:

The One Feather joined the N.C. Press Association in 2009 and has garnered awards in each year since it became eligible for awards in 2010.  This was Robert’s fifth award and Scott’s 47th.