BAKERSVILLE – The Cherokee Lady Braves (19-6) advanced to the 1A West Regional semifinals with a 71-61 win at Mitchell on the evening of Saturday, Feb. 24. The Lady Braves were led by freshman Deante Toineeta, who scored 20 points, and junior Tori Teesateskie with 13. The two were responsible for all seven of Cherokee’s three-point shots of the night.

“I told them we were going to be road warriors and we’re there.” said Chris Mintz, Lady Braves head coach, after the game. “We’re traveling all over the state it seems like, but we played hard. We battled a little bit of adversity there at the end, but we kept battling. We got into some foul trouble and the girls stepped up. I can’t take anything away from our team. That was a really good team we played and we did a really good job.” 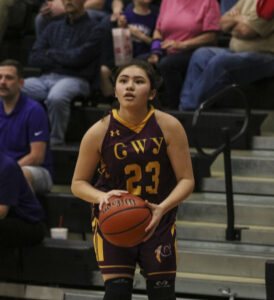 FOR THREE: Cherokee’s Deante Toineeta lines up for a three-point shot in the second half of a third round state playoff game at Mitchell on the evening of Saturday, Feb. 24. With 20 points, she led the Lady Braves over the Lady Mountaineers 71-61. (SCOTT MCKIE B.P./One Feather photos)

Coach Mintz was happy with the offensive production in this game. “We were starting to attack them a little more. Earlier in the game, we were being a little more passive and once we started attacking them, then we started getting some open looks and things became a little easier for us.”

With the win, the Lady Braves are scheduled to travel to Murphy for the regional semifinal game on Tuesday, Feb. 27. It will be the fourth matchup between the two teams that shared the regular season Big Smoky Mountain Conference title.

Following Saturday’s game, Teesateskie commented on their win, “It means a lot to us. We still have to keep going. We’ve got Murphy coming up and we have to play as a team.”

She added, “We’re not being selfish with the ball, that’s something you can’t do. We’re just playing incredibly, and we’re going to keep playing incredibly and getting better and better each day. This was a tough one, but we got it, so now we go onto the next one.”

Toineeta, playing in the biggest game of her young career, commented, “As a freshman, it’s a big year for me – very exciting! We are playing really good and not selfish.” 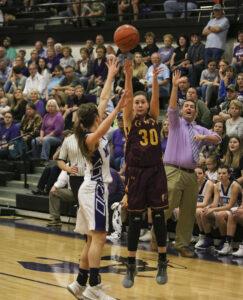 GOT ‘EM RATTLED: Cherokee’s Tori Teesateskie shoots a three-point shot in the first half of Saturday’s third round state playoff game at Mitchell. On the night she had 13 points.

The first quarter of the game started out evenly and saw several lead changes. With eight seconds left in the quarter, Teesateskie hit a three to put the Lady Braves up 17-15 after the first. Cherokee went on a 15-4 run in the next four minutes to lead 32-19. They would lead by as many as 16 points in the second quarter and ended up leading at the half 41-29.

The third was pretty even with the Lady Braves keeping a 10 to 12 point lead throughout most of the quarter. At the end of the third, Cherokee led 62-50. The fourth quarter was similar to the third. An eight-point differential was the closest that Mitchell got in the quarter, and the Lady Braves would move on to the 71-61 win.