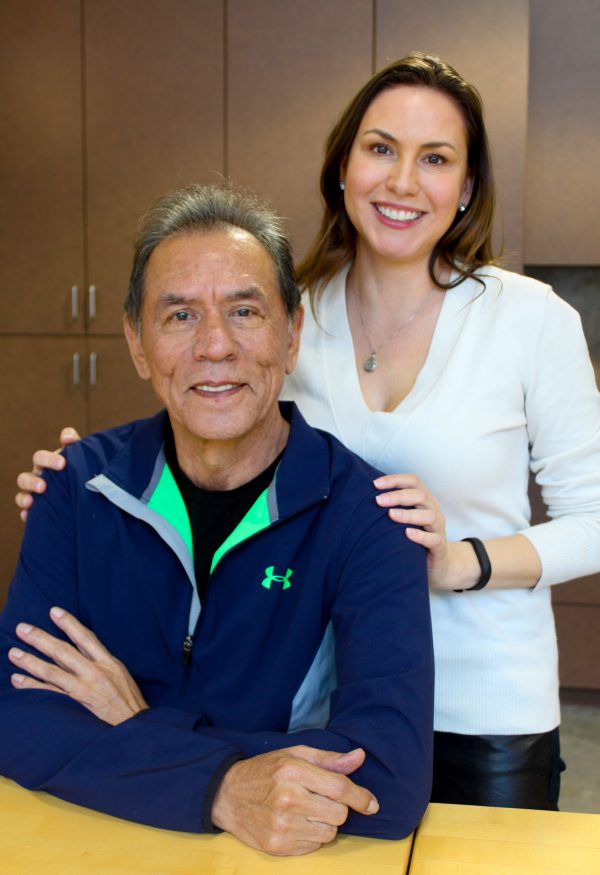 ACTORS: Wes Studi and his niece, Delanna Studi, both Cherokee Nation citizens and noted actors, are shown at the Museum of the Cherokee Indian on the afternoon of Friday, Feb. 23. The two were in town filming scenes at the Oconaluftee Indian Village as part of a new, permanent exhibit for the Sequoyah Birthplace Museum in Vonore, Tenn. (SCOTT MCKIE B.P./One Feather)

Two famed Cherokee actors were in town this week filming for a project that will be part of a new permanent exhibition at the Sequoyah Birthplace Museum in Vonore, Tenn.  Wes Studi and his niece, Delanna Studi, both Cherokee Nation citizens, filmed scenes for the project at the Oconalufee Indian Village.

Renovations began on the Museum last summer, and the new permanent exhibition will focus on Sequoyah, the Museum’s namesake who was born near the site.  This will be the first major exhibit change since the Museum opened several decades ago.

“It had a permanent exhibition put in at the time with a pretty limited budget,” said Lyn Henley, president of the Henley Company, the design firm working on the Museum’s upgrade project.  “Max Ramsey, who is the head of the Friends of Sequoyah Foundation, has been working on raising money for the last 26 years and was finally able to come up with enough money to do a brand-new, permanent exhibition.”

She further noted, “The whole exhibition is devoted to the story of Sequoyah’s life and explaining to people how he was able to invent a written language.”

Delanna is playing the part of Wutteh, Sequoyah’s mother, in the new project.  “I look at it that she probably had such love for her son.  I think that every mother has a bond with their child.  The scene that you’ll see is a flashback where I am singing to him and putting him to sleep.  Because the baby that we have for the scene is very similar to a real baby, it was easy to put myself in that situation, just rocking the baby back and forth and just having that unconditional love.”

She added, “I’m sure when she (Wutteh) looked upon her son she had no idea that he was going to create the Syllabary that would change our literacy rates and also start a newspaper where we could keep our language alive and flourishing.  I do think that, as a mother, you look down on your newborn and think of all of the possibilities and you hope that your child is going to grow up and make a difference.  But, she has no idea what difference he’s actually going to make.”

Wes, is playing Sequoyah in the project, and he commented, “I think Sequoyah is the epitome of the Cherokee spirit of having to adapt to anything and everything that comes our way.  It’s been kind of a Cherokee trait for hundreds of thousands of years in that whatever comes our way, we have to adapt to it and begin to use it.”

He went on to relate, “To me, I think the idea that Sequoyah honed in on, was ‘I see how the written word is a great advantage for Europeans.  I don’t see why we can’t do that.’ So, that’s what he sat down to do, to create a form of written communication.  I think he embodies the absolute spirit of Cherokee lifeways.”

The two were happy to be working together on this project.  “It’s great,” said Wes.  “We’ve been working on different projects for years, and now we get to do it in the old homeland.”

Several days ago, it was announced that Wes will be a presenter in the Best Sound Editing category at the 90th Academy Awards (Oscars) show set for Sunday, March 4 at 8pm.  “It’s good to be a part of the game.”

Laughing, he noted, “I’d rather be getting an award, but for now, this will do.”

It is believed Wes is the first Native American presenter.  “At least we’re kind of at the table now.”

The two keep busy with their careers, and Delanna has a play that she wrote and performs, entitled “And So We Walked”, opening at the Portland Center Stage in Portland, Ore., on Friday, April 6.

“Three years ago, I came through Cherokee and my father and I retraced the footsteps of the northern route of the Trail of Tears,” she said.  “So, I wrote a play about it called ‘And So We Walked’.”

The show will run 48 performances with a closing date of May 13.  “We’re also creating a curriculum around it to talk about the Trail of Tears, and what’s very exciting about it is while it is in Oregon, there will be two other plays by female Native playwrights that open within a week’s time.”

In addition to “And So We Walked”, Mary Kathryn Nagle’s (Cherokee Nation citizen) play “Manahatta” will be performed at the Oregon Shakespeare Festival, and Larissa Fast Horse’s (Sicangu Lakota) “The Thanksgiving Play” will be on stage at the Artists Repository Theatre.

Delanna commented, “I don’t know if this is the first time this has ever happened, but it’s one of those very rare instances.  I feel like it’s a unicorn sighting in the fact that we have three Native women who are having their works premiered in the same state within two weeks of each other at theaters that don’t normally do Native theater.”

For more information about the Sequoyah Birthplace Museum, visit: https://www.sequoyahmuseum.org/.