AROUND THE REZ: Cherokee Skate Park a good investment for Tribe 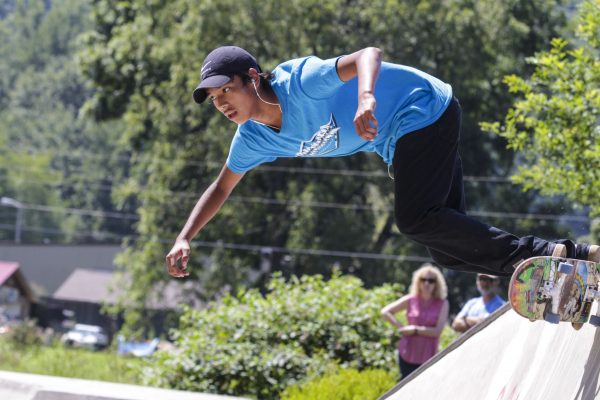 The Cherokee Action Sports Park, more commonly known as the Cherokee Skate Park, opened on a warm, sunny day in early June 2011.  Located in the Yellowhill Community, the facility is around 12,000 square feet and features both street and bowl or transition skating elements.

I live in Yellowhill, and there’s hardly a time that I drive by the Park when someone isn’t out there riding.  It is being used just about every day of the year.  I’ve seen skaters out there in the blisteringly humid heat of August and the frigid cold of January.  I’ve seen them out there in the rain and even snow.

For the past few years, the Yellowhill Community Club has hosted an annual Skate Jam event during the summer, and it is always packed for that event which draws participants and competitors from all over western North Carolina.  This summer will be the fifth annual.

A year before the Park opened, I interviewed Brad Siedlecki, of Pillar Skate Park Design Studios, who did the design for the Cherokee facility.  A skater since his pre-teens, Siedlecki met with local Cherokee skaters to get some of the design elements for the Park.

“We want to do our best to give you what you want,” he told the locals at a meeting held during the design phase.  “We like to take something you see in every skate park and change it up to make it unique.  We really want to make this park unique to your community.”

I would say from the amount of use the Park gets that he was successful in his design wishes.

Online, other skaters seem to agree.

On the website concretedisciples.com, one reader left the following comment about the Cherokee Skate Park, “Rad park with a litany of creative and unique features.  The street section is fun with a variety of fun obstacles from traditional rail, ledges, and stairs to the ditch wall with a love seat in it.  The park’s transition is incredible with a fun, flow bowl and peanut bowl in the back, smaller elements throughout the street area…”

Another reader commented on that site, “I can’t recommend this place enough.  I was in Charlotte visiting my transplanted family, and I drove up to the mountains to skate this park.  It was well worth the drive.”

Tony Hawk, skate legend, once stated, “I feel like skateboarding is as much of a sport as a lifestyle, and an art form, so there’s so much that that transcends in terms of music, fashion, and entertainment.”

It is great to see the Park being used so much, and it’s very, very cool to see so many Cherokee kids out there skating.  So, the next time you’re passing by the Cherokee Skate Park Park in Yellowhill, stop by and watch some great athletes or bring your board and have some fun.