ON THE SIDELINES: Shawn Crowe, “The Announcer of the Braves”

“Give the dime to Holden.”

“Raylen Bark with the steal, thievery!”

If you’ve set foot in the Charles George Memorial Arena for a basketball game, chances are you’ve heard the booming, always entertaining, voice of Shawn Crowe, an EBCI tribal member.  When other duties don’t take him away, he is the announcer for the Braves and Lady Braves games, and his professionalism and pure love of the game, the school, the students, the Eastern Band of Cherokee Indians, and what he does shows through with each call.

Now, Shawn will be the first to tell you he is not the “Voice of the Braves”, that title will forever belong to Ray Kinsland he says.  That’s why I personally call Shawn the “Announcer of the Braves”… 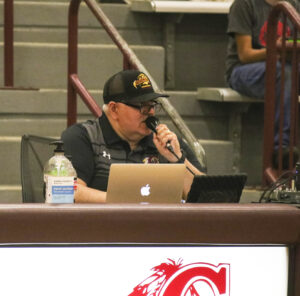 ANNOUNCER: Shawn Crowe, an EBCI tribal member, works the announcer table during a 1A state playoff game between the Cherokee Lady Braves and the Hiwassee Dam Lady Eagles on the night of Tuesday, Feb. 20. (SCOTT MCKIE B.P./One Feather)

There are very, very few high school facilities like Cherokee High School, and there are even fewer that have a professional announcer like Shawn.  Actually, the majority of the away games I cover don’t have an announcer at all, or they only do the player introductions at the beginning.

Shawn’s calls make it seem like a big-time college or NBA game.  Long-story short, his calls are cool!  They’re fun.

Shawn also leads by example.  Over 20 years sober, he has been frank about his past addictions, and he works to encourage young Cherokee people to avoid that life.  An event was held at the school three years ago entitled “No One Plans to be An Addict”, which was a frank discussion about addiction.

“All you have to do is ask for help,” Shawn told the students relating that total abstinence is the best policy.  “Stay away from it.  It will lead you on a path to destruction.”

Shawn is frequently called upon by tribal leaders to emcee various events, and he always brings a positive, uplifting message to each one.  At an event in September 2016 where the Tribe received a 35-acre tract of land adjacent to Kituwah from Duke Energy in a settlement, he spoke of the importance of that land to the Tribe and its members.

“There is hope.  There is good, and today we saw something good for the Eastern Band of the Cherokee.  Money always goes away.  We can lose money in a second, but land that is significant to the Eastern Band of the Cherokee and Duke’s willingness to give us back that land, ladies and gentlemen, that is a significant event in our people’s history.”

In an interview for ecletica.org with Kimberly L. Becker in 2011, Shawn noted, “Stories have always been how the Cherokee passed traditions down from generation to generation.”

The late Ernie Harwell, long-time announcer for the Detroit Tigers, once said, “In radio, they say, nothing happens until the announcer says it happens.”

That is the way it is in the Charles George Memorial Arena.  It might happen without Shawn, but he definitely adds style to the game.