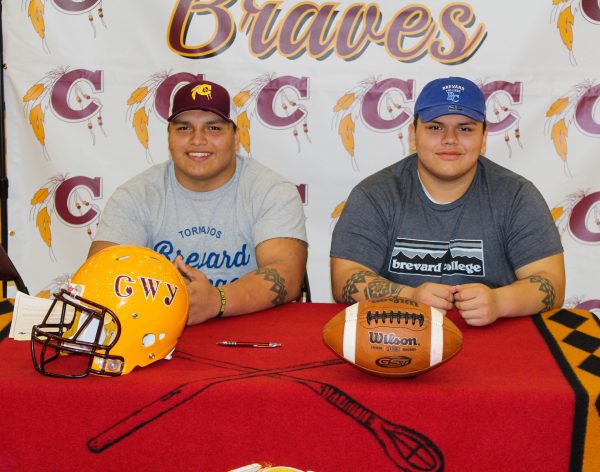 NEXT LEVEL: Cherokee Braves linemen Byron Locust (left) and Will Davis signed a letter of intent during a ceremony held at the Charles George Memorial Arena on the afternoon of Wednesday, Feb. 21 to play football at Brevard College. (SCOTT MCKIE B.P./One Feather photos)

Two more members of the historic Cherokee Braves 2017 1A State Championship team have signed letters of intent to play at the next level.  Star linemen Will Davis and Byron Locust signed with Brevard College during a ceremony held at the Charles George Memorial Arena on the afternoon of Wednesday, Feb. 21.

He went on to say, “To play college football, that’s fantastic in itself, but the things that they’re going to learn that college athletics teaches you will help them to be successful for the rest of their lives.  It will give them tools to go out there and be really successful in the real world.”

David Napert, Braves line coach, commented, “I’ve coached a lot of linemen in my career.  I’ve been coaching over 30 years.  Several of those guys I coached, not because of me, made it to the NFL.” 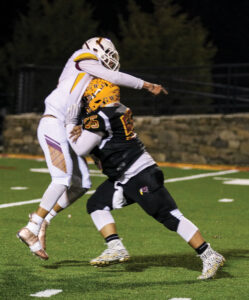 Pointing to Davis, he noted, “That young man right there is one of the best ones I’ve ever coached…he’s the best football player probably in the state right now playing defensive tackle.”

Of Locust, he said, “Every big game we had, every close game, Byron came up with a big-time play to save us…I love these guys and I’ll be following them the rest of their lives.”

Craig Barker, CHS assistant principal and Braves defensive coach, said, “I could talk all day about Will and Byron.  I’m just very proud of you.  We put a lot of time, sweat, blood, and tears into you two and all of our linemen.  We talk about legends, state champions, you did it.”

Locust, a four-year starter for the Braves as both a defensive and offensive lineman, was named to the NCPreps.com All-State team his senior year in which he had 43 solo tackles, 16 tackles for loss, and 5.5 sacks.  He also played on the defensive line for the FCA East-West All-Star Game as well as the Border Bowl All-Star Game. 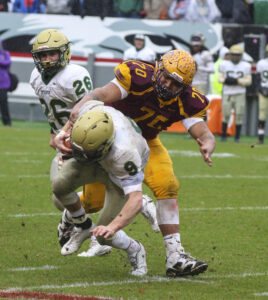 Davis, also a four-year starter for the Braves as a lineman on both sides, was named All-Smoky Mountain Conference his senior year in which he had 26 solo tackles, 7.5 tackles for loss, and 5.5 sacks.  He played as an offensive guard in the FCA East-West All-Star Game and as a defensive lineman for the Border Bowl All-Star Game.

“I’m excited,” he said.  “I’m looking forward to see what the next level is about.  All of the competition is going to be there.  I didn’t think I’d get to go play ball anywhere, but when Brevard told me they wanted me, I got really excited.”

To view or purchase photos from this event, visit: https://onefeather.smugmug.com/SPORTS/FOOTBALL/Davis-Locust-sign-with-Brevard-College-2-21-18/