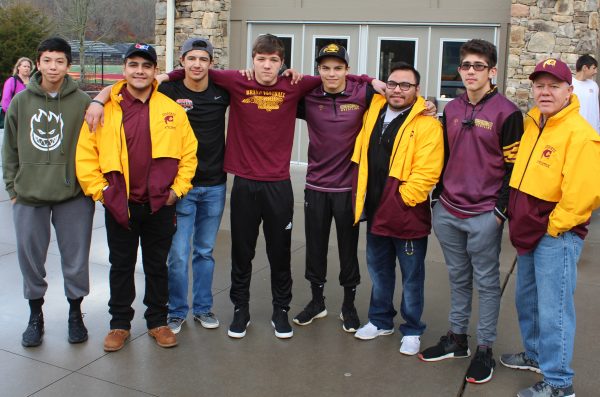 STATE: Three members of the Cherokee Braves varsity wrestling team competed in the 1A state tournament in Greensboro on Feb. 16-17 including: Caden Pheasant (third from left), Sam Sneed (fourth from left), and Seth Sneed (fourth from right). They are shown at Cherokee High School shortly before departure for the tournament on the morning of Thursday, Feb. 15. (SCOTT MCKIE B.P./One Feather)

The most outstanding wrestler award for the 1A state tournament went to Jude Lloyd, who represented Elkin High School in the 138lb. division.  He won the state title and finished the season with a 45-0 record.

The three Cherokee wrestlers qualified for the state tournament with fourth place finishes in their weight division at the 1A West Regional Tournament held at Avery High School on Saturday, Feb. 10.  Pheasant also took the Smoky Mountain Conference title in the 160lb. division in a meet where the Braves team placed third overall.  Seth Sneed placed second in the 132 lb. division at the conference meet and Sam Sneed placed third in the 152lb. division.

Following are the state tournament results for those three wrestlers:

The results of the championship finals in each weight division are as follows: