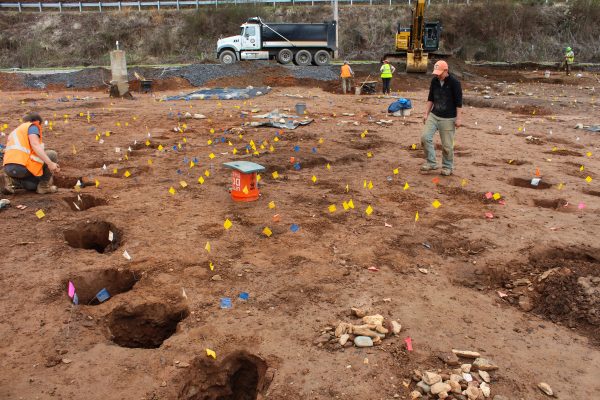 Archaeological work at a site, steeped in Cherokee history, at Harrah’s Cherokee Casino Resort, will wind up near the end of March.   The site, known as 31JK291, is in the original parking lot area of Harrah’s Cherokee Casino Resort with about four acres exposed for archaeological work.  Previously, several other attractions were found on the site including the Magic Waters Park and Frontierland.

The work is being completed by the Asheville-based firm TRC.  Tasha Benyshek, TRC archaeologist, related that the site contains several villages thousands of years old.  She gave a tour to staff members from the Museum of the Cherokee Indian on the morning of Friday, Feb. 16.

“It’s been a really good project,” she noted.  “It’s really rewarding to work on a project like this, especially here on the Boundary.  The biggest surprise was the 2,000-year-old village.  It is quite astounding.”

The village was from the Pisgah Phase said Benyshek.  “That’s a first.  We don’t have that anywhere.  The only place we have that documented is here.  When we get to open up a large area like that, we get to see village layout.”

The crew working on the site has marked every soil anomaly found such as those that would indicate a post for a house or a fire pit feature.  “When you see perfectly-spaced soil anomalies, you know it is the post pattern for a structure.”

One such pattern indicated a structure of a building dating back to around 1400 AD to a time known as the Early Qualla Phase.  Also found during the dig have been numerous pottery shards, stone tools, and mica. 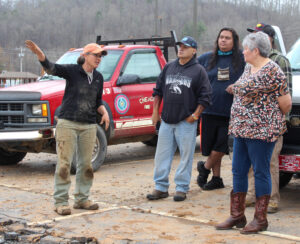 TOUR: Tasha Benyshek (right), TRC archaeologist, describes the site to staff members of the Museum of the Cherokee Indian at the beginning of a tour on the morning of Friday, Feb. 16. Shown (left-right) are – Benyshek, Sonny Ledford, Jarrett Wildcatt, Robin Swayney, and Mike Crowe Jr. (behind Swayney).

One structure pattern indicated a public building constructed in a basket-weave pattern where the post angle in known as a flex-pole structure.  “As far as prehistoric buildings, this was really, really big, and the posts were really substantial,” said Benyshek.

Robin Swayney, Museum of the Cherokee Indian genealogist and archivist, commented following Friday’s tour, “The coolest thing on this site is the prehistoric building.  In all of the history materials that I’ve looked at, those structures are basket-woven, and to actually see where one of those structures was is really amazing.  It’s amazing to be able to visualize our history through post holes and building structures.  It makes our history come alive to me.  You read about it, but to actually come out here and see it is a totally mind-blowing experience.”

Mike Crowe Jr., Museum of the Cherokee Indians’ Cherokee Friends manager, said, “It’s exciting to see first-hand.  It really puts everything into perspective that we hear at the archaeological conferences and the research that has been in existence for some time.  But, it really gives context to be here and see these things first-hand and to look and see the poles for the structures, the support poles around the hearth, and an actual hearth.  It’s a sense of connection that I haven’t experienced before now.”

Sonny Ledford, Museum of the Cherokee Indians’ Cherokee Friend, commented, “A lot of the old ones when I was growing up talked about those things, and it is nice to actually be standing there where a small house stood and to see the hearth where the fire burned.  I never doubted the validity of the things the elders talked about, but this puts another level of strong validation to what I learned.”

He said this process will be education to many EBCI tribal members.  “This will help educate our own people.  We have so many that are not educated on how they do these things and why they do them.” 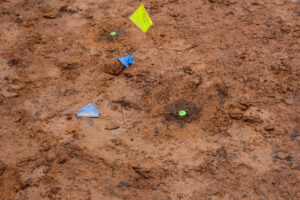 HOLE IN TIME: The dark circle with the two colored flags jetting from it represents where a post hole for a structure once stood. This particular structure dates to 1400 AD in the Early Qualla Phase.

Ledford said he used to be skeptical and against the work of some archaeologists.  “In the beginning, way back, I used to be against this stuff.  But, it does help to fill in some blanks about our people.  So, that helps educate us.”

Gesturing to the site, he noted, “This is us here. Everything that we’re looking at that they’re showing us belongs to our people and more people need to know about stuff like this.  I think if more people were invited here, like we were, and talked about these things to all the people, then they would understand their job and what they’re trying to help us with when it comes to our people and how we lived.”

Crowe added, “If more people are wanting to learn more about this, then they’re more than willing to share.  It’s much different than the image that most people have ingrained into their brains from when the archaeological game was very different such as cutting a trench through a mound.  This is much less invasive, and they have the same set of concerns that we do as community members.”

Clarence Murphy, Tribal Construction heavy equipment operator, has been helping move dirt at the site throughout the project.  “It’s pretty exciting…what’s really exciting is the house that was found that is not found everywhere that was made like a basket.”

Brian Burgess, Tribal Historic Preservation Office archaeologist, told how the project got going, “TCGE representatives contacted my office (THPO) in early 2017 to assess the impact that a proposed expansion would have on archaeological resources.  Conversations between TCGE Board of Advisors, Representatives of Harrah’s Cherokee Casino, TRC Environmental Corporation, and the EBCI Tribal Historic Preservation Office took place over the ensuing weeks and months prior to beginning the current excavations.”

According to Burgess, the site was an Early/Middle Woodland and Mississippian site (ca. 800BC – 1540 AD).  “Current Data recovery has identified 31 structures and various components of the site. For one, there is an intact Savannah River deposit with organics that may date as far back as 8,000 years. But, perhaps more exciting is the identification of an intact Pisgah Village. The Pisgah Phase of the Woodland period typically dates from about 1100 AD -1500 AD. To find an isolated and intact village that is approximately 900 years old has to be the most exciting and intriguing aspect of the site.” 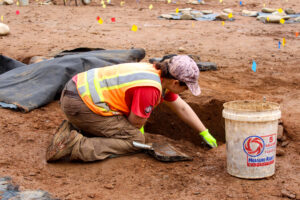 DETAILED WORK: TRC employee Missy Emery works on an area of the site on the morning of Friday, Feb. 16.

He further explained, “It strongly expresses a unique period of Cherokee history that has remained intact and undisturbed for more than half a millennium!”

Burgess further commented, “The scope of the project is to utilize heavy machinery to strip the entire area of potential impact of all overburden – asphalt, gravel, fill dirt, and plow zone,”  “At that point, archaeologists follow machinery and shovel shave the soil to expose intact features.”

He added, “Later, archaeologists clean back the features, record the locations and sizes via photographing and mapping, then hand excavate the features with hand tools and bag and tag the data. Potential human burials locations are recorded, and otherwise left alone, and will be left in place. Future building designs will incorporate these sensitive areas into planning.”

Burgess noted this is the latest in archaeological work at the site.  “The site was first recorded with the North Carolina State Historic Preservation Office by Lance Green in 1994 during his Qualla Boundary Archaeological Survey project. In his initial report, Green recommended additional study of the site prior to development. These early shovel tests showed that intact deposits from the Woodland and Mississippian Periods likely remained under the parking lot. In the fall of 1995, initial casino construction was held up so that a Phase II could further explore the site. At this time, Brett Riggs encountered intact features at the bottom of test trenches.”

Burgess said that based on those initial findings, a memorandum of agreement was drawn up between the Eastern Band of Cherokee Indians, the National Indian Gaming Commission, and the state’s historic preservation office to facilitate more study at the site.

A year later, Blue Ridge Cultural Resources performed the Phase II study. “Intact features were identified, as well as one potential human burial. This was enough to merit the relocation of the casino to its current location, on the far eastern edge of the property and thus avoiding the site and preserving it in place.”

Burgess praised the archaeologists working on this latest project for their perseverance working through the winter on days that dipped into the single digits.