ON THE SIDELINES: Tribe should be proud of college signees 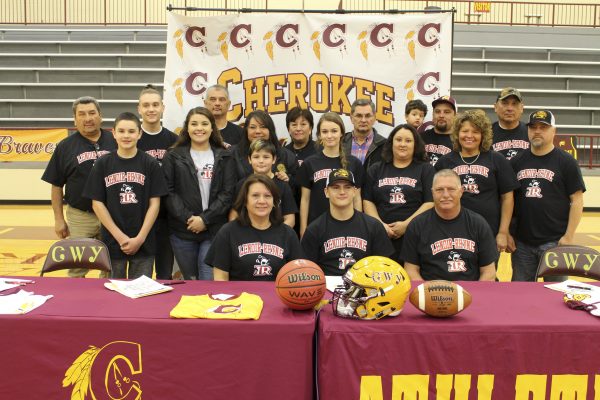 National Signing Day for high school seniors signing letters of intent to play college sports was on Wednesday, Feb. 7.  Thousands of students across the country signed to play at different colleges and universities, and the Eastern Band of Cherokee Indians should be proud that a total of seven young tribal members signed that day.

Cherokee High School had a total of five signees, the most in western North Carolina according to the Asheville Citizen-Times.  Tye Mintz signed to play football at Kennesaw State University.  While he is not technically a tribal member, Mintz is a valuable member of the school and the community, and I’d like to throw it out there that he’d be a great person to receive an honorary tribal membership similar to what was given to Ray Kinsland.

All of those mentioned above signed their letters of intent on National Signing Day.  There are actually three more EBCI tribal members that I know of that will sign in the next few weeks.  Out of respect for their privacy and their decision-making process of which school to choose, we will wait and announce those as they announce it themselves.

What is the importance of a signing and what does it represent?

First off, it signifies an accomplishment for the students themselves.  The athletes named above have put in countless hours training, eating cleanly, working out, watching game film, and practicing.  Many times, those hours involve sacrifices.  While other teenage students their age might be able to go to the movies or hang out with their friends, student-athletes have games and practices to attend.

Secondly, it signifies an accomplishment for the Tribe, the community, and Indian Country as a whole.  According to educationworld.com, around 65 percent of American Indians earn a high school diploma, 10 percent lower than the national average (75.2 percent).  The site also reports the national average of people earning a college degree is 20.3 percent while only 9.3 percent of American Indians earn a degree.

There is a plethora of reasons behind the disparities, and I won’t go into those in this particular column, but the young Cherokee students who signed recently and the ones who are soon to follow are all working hard to not only improve upon those percentages but to destroy the disparities entirely.

The late Nelson Mandela once said, “Education is the most powerful weapon which you can use to change the world.”