Tribal member glad to be home 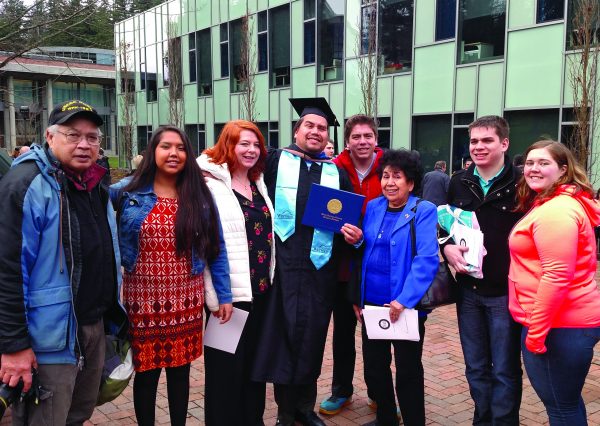 After spending nearly three decades in the Pacific Northwest, Frank Dunn is happy to be home on the Qualla Boundary.  Having been back in Cherokee full-time for a few months, Dunn, an EBCI tribal member of the Wolf Clan, is currently building a home in the Hyatt Cove area of the Wolftown Community.

Frank grew up in the Big Cove Community and graduated from Swain County High School.  After his wife became pregnant with their first son, the two moved to Washington state near his parents.  “I lived out there and raised my whole family out there.”

While there, Frank worked in various jobs including a 10-year stint as the communications director for the Swinomish Tribal Community in La Conner, Wash. which was followed by four years as the communications specialist for the National Native Arts & Cultures Foundation in Vancouver, Wash. A longtime magician, Frank started the Dunn Talent LLC in April 2013 and serves as its marketing director and illusionist in a magic theatre show.

Education has always been a key in Frank’s life.  Following graduation from Swain County, he studied radio and broadcasting at Southwestern Community College.  While in the northwest, he earned his bachelor’s degree in psychology in 1998 from Western Washington University in Bellingham, Wash.

His son’s graduation from college spurred yet more education for Frank.

“My son graduated with his bachelor’s, and when he graduated, I got up and said my values are God, family, and education.  My dad said, ‘well, if education is so important to you, then why aren’t you in school?’”

So, Frank went back to school to work on his master’s degree, and, in December 2017, he achieved that goal by earning his master’s in business administration, with an emphasis in finance, marketing, and economic development, from Western Washington.  “It was very monumental.  When you’re the only Indian in a class with a lot of non-Indians, I feel like sometimes I have to prove myself, and that’s been the story of my life living off the reservation…I feel like I have to prove myself and work harder to show them that I’m not the stereotype and break all of those stereotypes.”

He added, “I’m a big believer in education, and it’s never too late to go back. I’m a lifelong learner.”

It was during this time that he began to think of coming back to Cherokee.  “When I started looking at opportunity such as free health care, free dental with no co-pays, free fitness center, and the programs to provide and assist for housing, it’s a no-brainer. This is where I should be.”

He shared his thoughts and plans with his family on Thanksgiving Day 2016.  His wife, Margie, was hired with the Cherokee Family Safety Program in February 2017, and his son, Frankie, and his wife, Alyssa, now work at Harrah’s Cherokee Casino Resort as a gaming host and cage cashier respectively.

Frank noted, “There’s opportunity here if you’re willing to work and show up on time with a good work ethic.  The cost of living is lower.”

Frank’s daughter, Jazlyn, is a student at Cherokee High School and has a job lined up for the summer with the Oconaluftee Indian Village.  “She feels at home.”

He said it has been nice to walk into a restaurant or store and see other Native people.  “I’m happy to be home.  There’s something deep here.”

Plus, there are the memories.

“I have memories of fishing in Santeetlah Lake with my grandfather, the late John Walkingstick, and riding in his truck and him telling me, ‘that’s Rattlesnake Mountain’, and then thinking, as a little kid, ‘wow, that’s where all the rattlesnakes live’.”

He recalls having his first Big Mac while riding to Asheville with his uncle, John Ed Walkingstick, and his first job at the old Dairy Queen which was located where the Harrah’s Cherokee casino parking lot is now.

“I’m excited to come back to Cherokee.”