ON THE SIDELINES: You honor Mr. Kinsland by honoring yourself 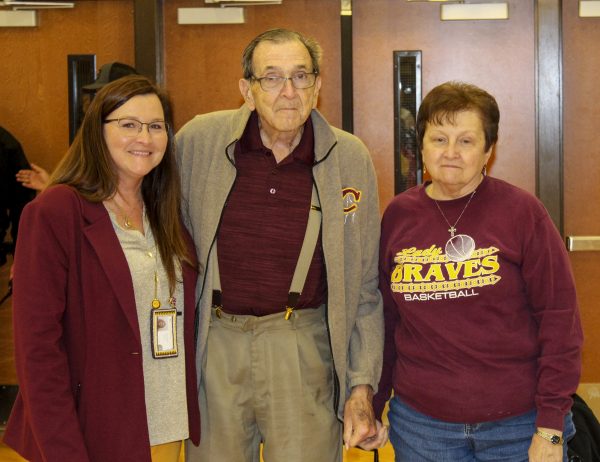 HELPER: Ray Kinsland (center) was recognized prior to the varsity basketball games at the Charles George Memorial Arena on the evening of Tuesday, Feb. 6 for his 59 years of involvement with Cherokee Central Schools and specifically its athletic programs. He is shown with his daughter, Debora Foerst (left), Cherokee High School principal, and his wife, Jerri. (SCOTT MCKIE B.P./One Feather)

During a home basketball game in the Charles George Memorial Arena on the evening of Tuesday, Feb. 6, Ray Kinsland was recognized for his 59 years of service to the Cherokee community and especially Cherokee Central Schools athletics.

Over the years, he has been honored for his expansive service to the community including being named an honorary member of the Eastern Band of Cherokee Indians and given the Cherokee name Di-sde-li-sgi-a-ni-wi-ni which translates as “Helper of Young Men”.

At one time, two stadiums were named for him…one was torn down, so, now there’s only one.  In 2011, I covered Kinsland’s retirement luncheon after 53 years as general manager of the Cherokee Boys Club.  During that event, then-State Rep. Phil Haire presented him with a Certificate of Appreciation from the North Carolina General Assembly.

In addition, he has been named to the states’ Order of the Long Leaf Pine, has received the Citizen of the Year Award from the Steve Youngdeer American Legion Post 143, has received the Frell Owl Award, and has received the NCHSAA Unsung Hero Award.  Last year, the Ray Kinsland Leadership Institute opened to serve as an umbrella organization for the Right Path Adult Leadership Program, the Cherokee Youth Council, and the Jones-Bowman Leadership Award Program.

Kinsland is a humble man and never asks for recognition.  For years, he has offered a prayer and encouraging words before each football and basketball game.  The key phrase there is encouraging words.

Following being honored for 57 years of service a few years ago, he wrote a thank you letter to the community that we printed in the One Feather where he stated, “I love every one of you, and I am both humbled and thankful for you allowing my family and me to live and serve with this beloved people in this sacred homeland.”

That statement sums up his feelings.  It also lays the groundwork of how best to honor him.  As a humble man, Kinsland appreciates the awards and recognitions he has received, but he doesn’t expect them and that certainly isn’t why he has served the community for so long.

On the sidelines, too many times to count, I’ve heard him encourage the players not only to play hard, but, more importantly, to believe in themselves and to play as a team, a community, and a nation.  I have also heard him countless times encourage the young students in their educational pursuits as well as encourage them to serve their community and Tribe.

Prior to the games this past Tuesday when Kinsland was recognized, the Cherokee players went to him and shook his hand, gave him hugs, and gave him words of encouragement like he has given to them so many times before.

Kinsland always has a good sense of humor, and there is hardly a time when I speak with him that he doesn’t tell me a joke or a witty saying – something I’ve come to really look forward to over the decades.  My favorite one is one of the first ones he ever told me, and I’ll share it here.  Never start a fight with a newspaper unless you have a bigger newspaper.  That one always got me.