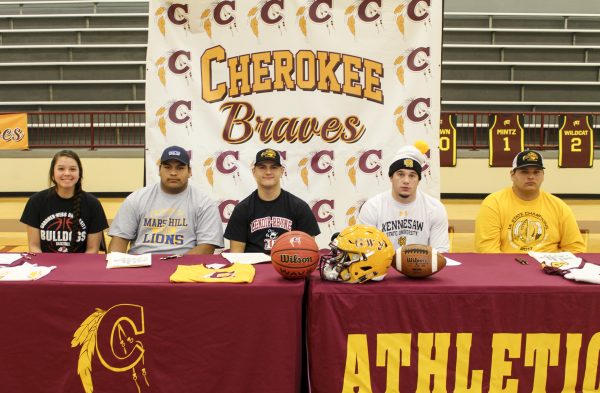 Five athletes at Cherokee High School signed letters of intent to play college sports on National Signing Day.  Four members of the Cherokee Braves 1A State Championship football team and one member of the Lady Braves basketball team signed during a ceremony held in the Charles George Memorial Arena on the afternoon of Wednesday, Feb. 7.

“We’re so proud of the commitment these young men have made to put themselves in an opportunity to play at the next level,” Kent Briggs, Braves head football coach, said of his four players.  “It is very challenging to do that and takes a lot of support from their families, coaches, and the biggest thing is their desire to do that.  I feel very proud that they’ve had confidence and have believed in themselves enough to take the next step.”

Chris Mintz, Lady Braves head basketball coach, commented on Wolfe’s signing, “She has a chance to go play at a great school like Gardner-Webb and fulfill her dream.  In seventh grade, she started playing and that’s what she wanted to do.  She worked hard, and now she’s going to get a chance to go play college basketball.”

Tye Mintz, Braves senior quarterback and safety, ended his career as Cherokee’s all-time total offensive leader.  His senior season, he completed 111 of 191 passes for 2,085 yards and 18 TDs and rushed the ball 194 times for 1,803 yards and 34 TDs.  On defense, he had 48 solo tackles, five tackles for loss, and four interceptions.

Straughan, Braves senior, was a three-year starter at outside linebacker and wide receiver.  As a senior, he caught 24 passes for 448 yards and three touchdowns.  On defense, he had 27 solo tackles, 7.5 tackles for loss, two interceptions, two sacks, and two fumble recoveries.

He was named All-Smoky Mountain Conference (2016, 2017) and was named Honorable Mention All-Western North Carolina his senior year in addition to being a starting safety in the FCA East-West All-Star Game.

Perez, Braves senior, started every game at offensive tackle for the past three seasons as well as being a strong defensive player. As a senior, he had 16 solo tackles, two tackles for loss, and one sack.  He was named Most Valuable Defensive Player in the 1A State Championship game as well as being named All-Western North Carolina.  He started at offensive tackle in both the FCA East-West All-Star Game and the Border Bowl All-Star Game.

“It feels really nice,” said Perez.  “It’s a dream come true.  Since I was little I always wanted to go play in the pros, just have fun doing what I love.”

“It’s going to be a great experience,” he commented.  “It’s something that I’ve been dreaming of since I was a kid.  It’s great to live out my dream.”

Wolfe, a 4-year member of the Lady Braves varsity basketball team, was named to the All-Smoky Mountain Conference team in the 2016-17 season.  “It’s what I’ve always wanted and is a dream come true.”

To view more photos from this event, visit: https://onefeather.smugmug.com/SPORTS/CHS-Signing-Day-2-7-18/