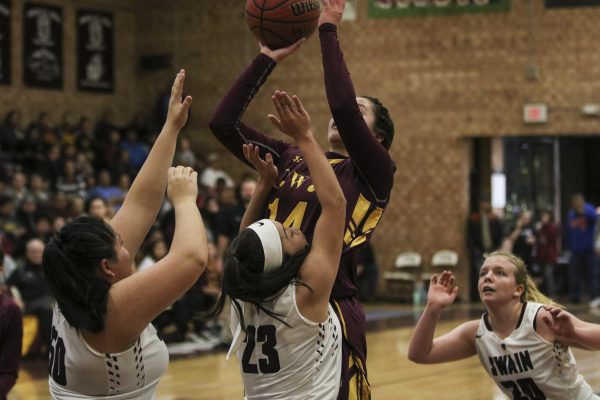 INSIDE: Cherokee’s Shelby Wolfe (#14) shoots inside as Swain County’s Sharlotte Jackson (#50) and Bri Ross (#23) defend. Wolfe finished the game with 10 points as the Lady Braves defeated the Lady Maroon Devils 75-45 in a game at Swain County High School on the evening of Tuesday, Jan. 30. (SCOTT MCKIE B.P./One Feather photos)

The Lady Braves were fresh off of a heartbreaking 3-point loss at Murphy on Saturday.  “Saturday was a pretty emotional game for us, and we came out tonight and were a little flat early,” said Chris Mintz, Lady Braves head coach.  “It took us about a half to get to the way that we play basketball. In the second half, we did a pretty good job of creating a tempo and making it our type of game.”

He added, “We haven’t been able to press successfully all year long as we haven’t been playing good, hard defense.  The better we play defense, the more points we get.  It’s to our advantage for the game to go really fast because we don’t have a lot of height.”

The third quarter was all Lady Braves as they outscored Swain 22-9 to lead 54-29 after three.  Cherokee was able to get some good bench play in the fourth quarter, and they took the 75-45 win. 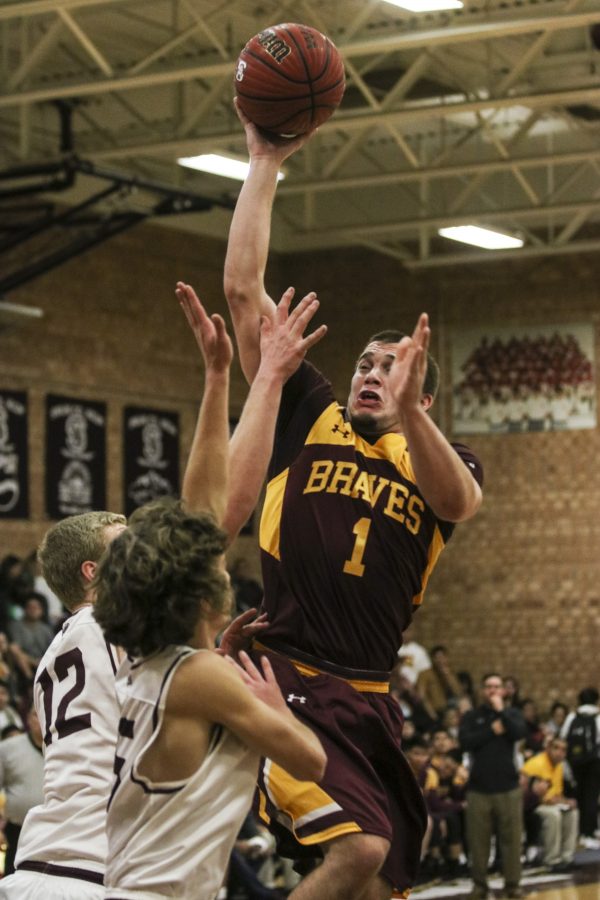 INTENSITY: Cherokee’s Tye Mintz (#1) goes for a shot inside over Swain County’s Zeke Bradley (#12) and Jesse Waldroup (#15). Mintz led Cherokee over the Maroon Devils with 27 points, 3 blocked shots, and 8 rebounds.

The Braves won their tenth in a row on Tuesday evening and remain unbeaten in the Big Smoky Mountain Conference.

“We responded in the second half,” said Aaron Hogner, Braves head coach.  “The first half was kind of up-and-down.  We’d make some runs, but then we’d slack on some things defensively and offensively, we quit doing some things that help us to be successful.  But, in the second half, we picked it up and finished the game off.”

The first few minutes of the game were very close with Cherokee leading 9-7 at the 5:24 mark of the first quarter.  By the end of the quarter, the Braves had extended that lead to 24-17.

The Braves did respond in the second half, and the third quarter was all Cherokee as they outscored Swain 30-13 to lead by 20-points (73-53) going into the fourth.  Like the Lady Braves, due to the lead, the Braves were able to get some good bench play in the final quarter, and they ended up with a 98-75 victory.

With the regular season winding down and the playoffs looming, Coach Hogner is happy with how his team is progressing, but notes they’re still improving.  “We still have to pick up our defensive intensity.  We’re rotating better as far as the help defense, but we can always get better at that.  And, we need to just play fast, getting these guys to push the ball up the court and make more than two or three passes before we get a shot off.  Our shooting percentage goes up when we make about four or five passes and beyond.  We’re breaking defenses down, and it helps us get easier shots.”