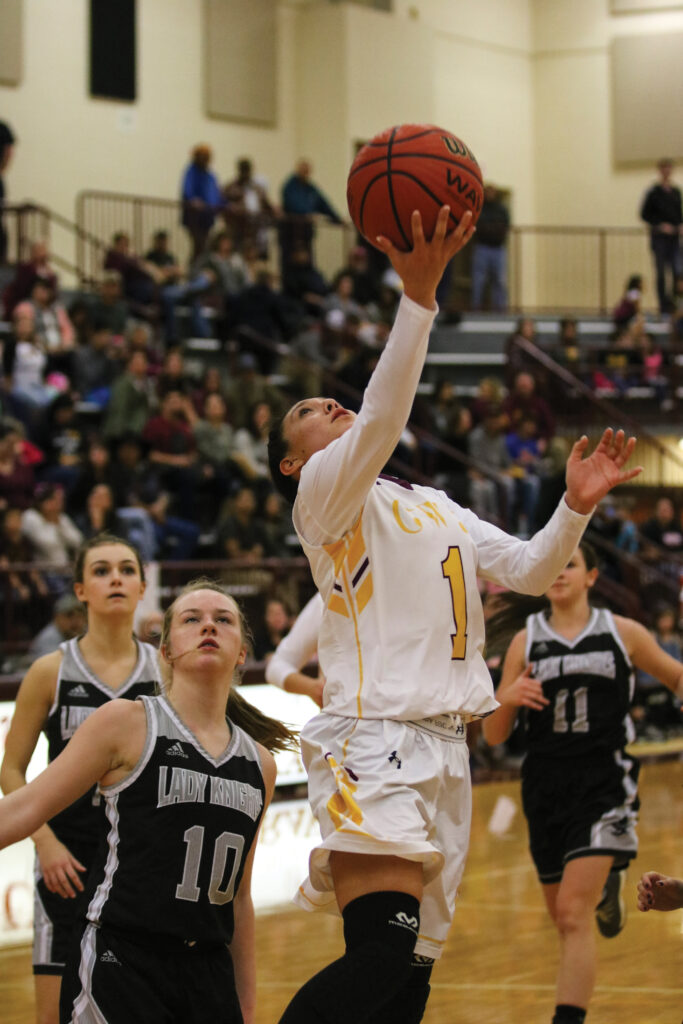 In a busy week on the hardwood, Cherokee got wins on Monday, Tuesday, and Friday to bring their record to 10-4 and remain unbeaten in the Big Smoky Mountain Conference.  The Lady Braves got key conference wins over Hayesville, Robbinsville, and Rosman.

“The first two games we had this week were very physical games,” Chris Mintz, Lady Braves head coach, said after their win over Rosman on Friday, Jan. 26 in the Charles George Memorial Arena.  “They were tough and we battled through them, and we ended up winning by a decent margin.  Tonight, I thought we played really well.”

Coach Mintz said his team is beginning to really gel.  “We’re getting into game shape and playing well with each other and playing at game speed because it’s hard to simulate that in practice.  And, for them to actually do it out there in front of people is important.  We have four freshmen, and they get starry-eyed sometimes.  Now, they’re starting to come around and play well, and when they play well and our older girls are playing well, we’re a pretty good team.” 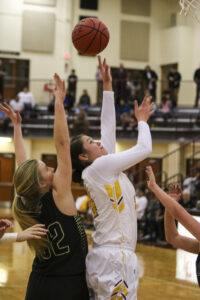 INSIDE GAME: Cherokee’s Shelby Wolfe (right) goes for a shot against Hayesville’s Makayla Anderson (#32) during a game on Monday, Jan. 22 at the Charles George Memorial Arena. On the night, Wolfe had 14 points and 8 rebounds in a 70-53 win for the Lady Braves.

The Lady Braves got things going with a 70-53 win over Hayesville on Monday, Jan. 22 at the Charles George Memorial Arena.  Cherokee had three players in double digits including Tori Teesateskie 14, Shelby Wolfe 14, and Raylen Bark 13.  Wolfe grabbed eight boards and Bark had seven rebounds and four assists.

Cherokee came out in its patented full-court press and kept the pressure going most of the game.  The Lady Braves led 37-24 at the half, and they kept that double digit lead in the second half pulling ahead for the 17-point (70-53) win.

The following night, Cherokee hosted the Robbinsville Lady Black Knights in a game that started much closer but ended in the exact same point differential as the Lady Braves won 59-42.  Again, Cherokee had three players in double digits including Bark 15, Teesateskie 11, and Toineeta 11.  Wolfe had 10 rebounds and Bark had eight rebounds and eight steals.

This game was tight in the first half with the lead changing several times.  The Lady Black Knights actually led at the half 23-20.  But, the second half was Cherokee’s as they outscored Robbinsville 39-19 to take the 17-point win. 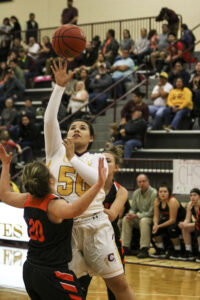 SHOT: Cherokee’s Timiyah Brown goes for a shot over Rosman’s Gracy Briggs in a game on Friday, Jan. 26 at the Charles George Memorial Arena. Brown led Cherokee on the night with 14 points in an 86-44 win for the Lady Braves.

Cherokee faced the Rosman Lady Tigers in their third home game of the week on the night of Friday, Jan. 26 and came away with an 86-44 win. The Lady Braves had four players in double digits with Brown leading the way with 14 points followed by Tori Teesateskie 13, Shelby Wolfe 10, and Kayleigh Wolfe 10.

Cherokee led the entire way.  They built a 20-point (47-27) lead by the half and built a 40-point lead in the second half invoking the NCHSAA mercy rule en route to their 42-point win.