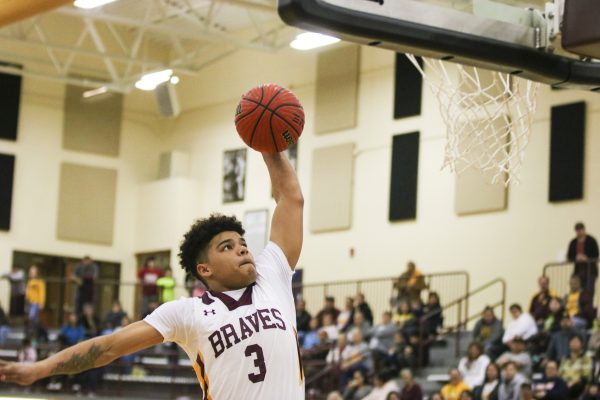 SOARING: Cherokee’s Justus Day goes for a dunk during a game against Hayesville on Monday, Jan. 22. With 23 points and 8 rebounds, Day led Cherokee to a 76-45 win. (SCOTT MCKIE B.P./One Feather photos)

The Cherokee Braves improved to 11-3 on the season and remain unbeaten in the Big Smoky Mountain Conference with important wins over Hayesville, Robbinsville, and Rosman in a big week.

“Some of the guys that we need to kind of pick it up are starting to play better,” Aaron Hogner, Braves head coach, said following their win over Rosman on Friday, Jan. 26 in the Charles George Memorial Arena.  “It was a 20-point game for most of the second half, but it felt a lot closer because we were still flat and our shots weren’t falling.  But, we pulled it out for the win and our defense picked up and that had a lot to do with our win tonight.”

Coach Hogner said his team is starting to come together.  “We had a good halftime as far as some guys really taking over and being a little more vocal, and whenever you have guys that are starting to become vocal and positive with each other, that’s a good thing for us.  They know we didn’t play too well tonight, but we got the win.  We’re still growing, and we haven’t reached our peak yet.” 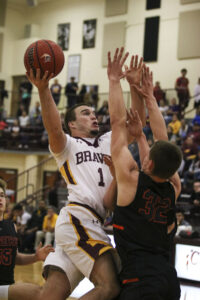 SHOT: Cherokee’s Tye Mintz (#1) shoots over Rosman’s Deland Thomas during a game at the Charles George Memorial Arena on the evening of Friday, Jan. 26. On the night, Mintz had 17 points and 10 rebounds.

The Braves started out the week with a 76-45 win over Hayesville on Monday, Jan. 22.  Justus Day led Cherokee with 23 points followed by Holden Straughan with 14 and Tye Mintz with 11.  Mintz led with 10 rebounds followed by Day 8 and Straughan 6.

Cherokee trailed 20-19 at the end of the first quarter, but quickly turned it around in the second outscoring the Yellowjackets 17-10 to lead by six 36-30 at the half.  The second half was all Braves though as they outscored Hayesville 40-15 to take the big win.

The next night, Cherokee kept the ball rolling with a 30-point (76-46) win over the visiting Robbinsville Black Knights.  Day led the way with 17 points in a game that saw three other Braves players in double digits including Straughan 14, Santa Maria 14, and Tihjah Lossiah 11.  Tye Mintz grabbed nine rebounds.  Seth Smith and Joaquin Layno each grabbed six rebounds coming off the bench in the second half.

This game was all Cherokee all the way.  They jumped out early and led by 22 points (34-12) after the first quarter.  They kept the pressure going and kept knocking down shots to lead 56-20 at the half.  In the third quarter, the Braves went up by 40 points invoking the NCHSAA mercy rule, and they cruised to a 76-46 win.

The Braves won big over the Rosman Tigers by a score of 95-76 on the night of Friday, Jan. 26 in the Charles George Memorial Arena.  Five Braves were in double digits including Sterling Santa Maria 20, Tye Mintz 17, Holden Straughan 16, Josiah Lossiah 12, and Cade Mintz 11.  Josiah Lossiah, who had five assists and five steals, also led the Braves with 11 rebounds followed by Tye Mintz with 10.

The game started out evenly with the teams being tied at 17-17 after the first.  Cherokee edged Rosman in the second quarter to take a 39-28 lead into the locker room.  They kept around a 20-point lead for most of the second half en route to their 19-point win.