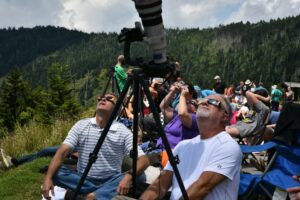 For the second year in a row, Great Smoky Mountains National Park welcomed over 11 million visitors. In 2017, a record 11,338,894 people visited the national park, which is a slight increase, 0.2 percent, over 2016. The park continued to see the highest visitation in July which was followed by October and June. Monthly visitation records were set during the shoulder season months of January, February, April, September, and November in 2017 which follows a pattern of the park seeing increased year-round visitation.

“We strive each year to provide exceptional services to the visitors who come to enjoy the Smokies,” said Superintendent Cassius Cash. “With increasing visitation across seasons, this does not come without challenges. I am proud of the employees who work hard each day to meet these challenges, along with the support of our volunteers and partners who collectively help us care for this incredibly special place.”

In 2017, over 2,800 park volunteers donated over 115,000 hours of service. These volunteers provided much needed help across the park including trail maintenance, invasive plant removal, and providing visitor information along trails, at visitor centers, and in campgrounds. Visitors spent nearly 400,000 nights camping in the park which was slightly down from 2016, but above the five-year average.  The park offers nine front country campgrounds and 100 backcountry campsites for visitors to enjoy across the park.

Notably in 2017, the park hosted the largest special event in park history. The western half of the park provided prime viewing to experience totality for approximately 2 minutes during the Great American Total Solar Eclipse. Thousands of visitors participated in ranger-led events on the weekend leading up to the eclipse on Monday, Aug. 21, 2017. Over 15,600 people attended eclipse events offered at Cades Cove, Clingmans Dome, Oconaluftee Visitor Center, and Sugarlands Visitor Center. Over 47,000 visitors entered the park from the four main entrances to view the eclipse, marking a 64 percent increase in visitation for that day over 2016. Another 26,000 people watched the live broadcast of the Clingmans Dome event in partnership with NASA and another 6 million people watched the event online from across the world via the NASA 360 broadcast.

For more information about visitation, please go to the National Park Service Visitor Use Statistics web page at https://irma.nps.gov/Stats/.