ON THE SIDELINES: Rhythm and gelling more important than polls

Neither of Cherokee’s varsity basketball teams got off to a great start this year, but man has that turned around.  As of the evening of Tuesday, Jan. 23, both teams are riding seven game win streaks – that will probably be more once the week is over.

Neither team has been listed in the NCPreps.com 1A basketball polls this season.  The Braves (10-3 as of Jan. 23) are named as an Honorable Mention team – just off the list – in the Jan. 22 poll while Hayesville is listed as #9.  Cherokee defeated Hayesville 75-47 on Jan. 6.  Ironically, they defeated them by an almost identical score of 76-45 on Jan. 22 – the same day the poll came out.

I say – no worries.  Who cares really?  I would actually prefer it if neither Cherokee team was listed in the poll or polls all year long.  Cherokee does really well in the underdog status. 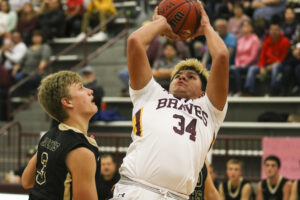 I’m sure that the Braves, and possibly the Lady Braves, will be listed in next week’s NCPreps.com poll…but, if they aren’t for whatever reason, that’s fine.

Now, don’t get me wrong, I’m not coming down on the poll or the pollsters…they probably haven’t seen Cherokee play in the last few games.  The Braves have developed a rhythm and are gelling at a crucial time in their season.

They dropped their opening game at Smoky Mountain on Dec. 18, 2017 by a score of 92-81, and I was actually quite impressed it was as close as it was because that was just a week after the football state championship game, and a good majority of those same boys went right from the gridiron to the hardwood with very little practice.

The Braves’ win-streak began with the first game of 2018 which was against the Swain County Maroon Devils.  Following that game, Aaron Hogner, first-year Braves head coach, told me, “We’re still growing and getting them in the habit of doing things right all the time.  We’re making simple turnovers and just need to start playing consistently and getting rebounds.”

Everything he spoke of that night is improving and coming together.  The Braves seem to be getting better with each game, but many of the pollsters don’t get to see that.  Maybe they’ll read this column?  But, I still hope they don’t vote for the Braves or Lady Braves in their polls…it’s just perfect locker room fodder.

Plus, if you’re unranked, people tend to underestimate you which is always a bad thing to do.

After a game the other night, I was still wide awake after putting up my photos and final score graphics, so I watched some of the 1989 “classic” movie “Roadhouse” starring the late, great Patrick Swayze.  In it, Dalton tells his fellow bouncers, “Never underestimate your opponent.”

Good words, but I hope people continue to underestimate the Braves and Lady Braves.  And, in the end, gaining a team rhythm and listening to your coach’s teachings will get you further in the state tournament than any poll.