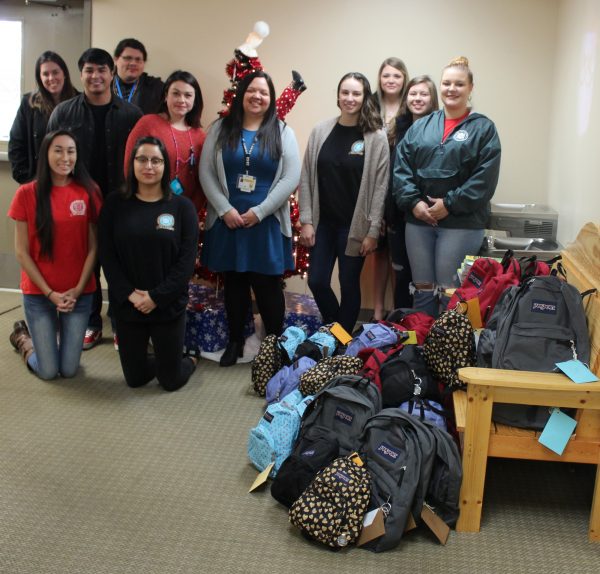 For many, the holiday season is a time to be spent in the company of friends and family celebrating honored traditions; for the Jones-Bowman Leadership Award Fellows, their tradition is their annual group service project. Every year, the Fellows are charged with creating, planning, and executing a group service project of their choosing that they feel will benefit the community. This project is planned over the summer and then completed sometime throughout the school year.

The Jones-Bowman Fellows delivered 50 backpacks to the Family Safety program for their Comfort for Kids group project, on Dec. 18, 2017. The supplies and bags will be used for children that are placed in foster care as a way to alleviate some of the financial burden of the foster parents and to help the children cope with the transition.

The Fellows want to thank the Destination Marketing program, under the EBCI Division of Commerce, for allowing them to set up and sell 50/50 tickets during the 105th Cherokee Indian Fair. Their share of this funding was used to purchase supplies for the backpacks.  Additionally, donations were provided by the Cherokee Indian Hospital, the Sequoyah Fund, New Kituwah Academy, and The Ray Kinsland Leadership Institute.

“The project was so successful last year we wanted to do it again and make it bigger because we knew the demand was high,” said second year Fellow, Faith Long.  “Knowing that we were able to give back as busy college students, and have so much support, really shows me the strength of our community and the importance of what we’re doing.”

The Jones-Bowman Leadership Award Program is a program under the Ray Kinsland Leadership Institute; a department of the Cherokee Boys Club and is funded by the Cherokee Preservation Foundation.