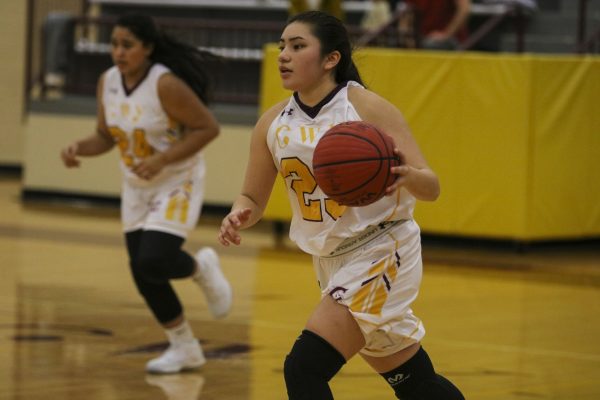 HUSTLE: Cherokee’s Deante Toineeta (#23) brings the ball up the court in the second half of a game against Highlands at the Charles George Memorial Arena on Friday, Jan. 12. She led the Lady Braves with 20 points as Cherokee beat the Lady Highlanders 91-60. (SCOTT MCKIE B.P./One Feather Photos)

Cherokee’s varsity basketball teams swept visiting Highlands in games at the Charles George Memorial Arena on the rainy evening of Friday, Jan. 12. – their fifth consecutive wins.  The Lady Braves (7-4) defeated the Lady Highlanders 91-60, and the Braves (8-3) beat the Highlanders 86-51.

Chris Mintz, Lady Braves head coach, said his team has rebounded from a slow start. “We about killed ourselves early. We were playing some really good teams, so we’ve kind-of come out of that and we’re finally starting to feel like we’re pretty good and getting some confidence that’s helping us play. Tonight, we didn’t play great at times, but we played really good at certain spots in the game and just kept pushing the lead out until it ended up being 30.”

Cherokee was led by Deante Toineeta with 20 points followed by Shelby Wolfe 18, and Tori Teesateskie 16.

The first quarter of the game was even with several lead changes.  Cherokee led 12-10 at the 4:35 mark and the Lady Highlanders took a slight 17-16 lead by the end of the first.  The Lady Braves opened it up more in the second period outscoring Highlands 28-9 to lead 44-26 at the half.

The Lady Braves, undefeated in Smoky Mountain Conference play this season, have several key conference games upcoming including a date at Murphy on Friday, Jan. 19.

“Right now, at the top it’s us and Murphy, kind-of like it was last year,” said Coach Mintz. “We know it’s going to be a battle down there.  We’ve got to beat Hayesville, who we struggled with last time we played them.  We have to play them Tuesday before we can get to Friday.”

SLAMMED: Cherokee’s Justice Day electrified the crowd with three slam dunks on the night as the Braves beat the Highlands Highlanders 86-51.

Aaron Hogner, Braves head coach, commented after their game, “We are still coming out flat. Just trying to get them to understand that we need to play up to our potential every night, no matter who we’re playing, and just coming out and being more consistent.”

He added, “It took us a little bit to get going, but we still can’t be satisfied. But we got a win.”

The Highlanders led the entire first quarter.  They led 7-4 at the 5:29 mark, 15-12 four minutes later, and 19-12 at the end of the quarter.  Cherokee grabbed the lead in the game three minutes into the second quarter as Tihjah Lossiah made two buckets in a row to put Cherokee up 25-22 – a lead they would not relinquish.  The Braves went on to lead at the half 44-34.

Coach Hogner said his team is beginning to get into a rhythm. “Practices are getting a little bit better, but we still have a lot of improvement to make. This team is full of potential and I don’t think that we are close to reaching that full potential. We’re still going to work.”

The Braves are also undefeated in conference play with key Smoky Mountain match-ups coming against Hayesville on Tuesday, Jan. 16 and at Murphy on Friday, Jan. 19.

Individual stats were unavailable for the boys game.