ON THE SIDELINES: Comebacks embody the hope of sports

This past Monday, most of us sports fans watched the College Football Playoff National Championship Game.  The Georgia Bulldogs led 13-0 at the half, only to see their dreams of a first national title since 1980 fly out the door as the Crimson Tide of Alabama came back to win in dramatic fashion in overtime.

That game has spawned a million memes online comparing it to Super Bowl 51 which saw the Atlanta Falcons lose 34-28 to Tom Brady and the New England Patriots after leading 28-3 in the third quarter.

While some look at those games as horrific blown leads by the Bulldogs and the Falcons, I prefer to look at them as incredible comebacks by the Crimson Tide and the Patriots.  To overcome deficits like that, you need a complete halftime turn-around of strategy and attitude combined with a fair amount of good calls and proverbial luck. 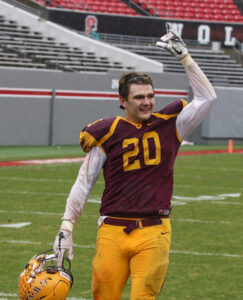 CHAMPS: Holden Straughan, Braves senior, celebrates as time expires in the 1A state championship game won by the Braves last month. Cherokee overcame a halftime deficit to take the trophy.

Those of us who traveled through the snow and ice to the 1-A state championship game in December saw such a comeback.  Unless you were just recently thawed out after being encased in ice for 70 years, you know the outcome of that game.

All season long, the Braves played well in the first half – dominating many.  They outscored their opponents 324-99 (21.6 – 6.6) in the first half.  They only trailed at halftime twice in the regular season.  Cherokee trailed Rosman 21-19 before shutting them out in the second half and scoring 18 unanswered points to take the win 39-21.  They also trailed Murphy 7-0 at the half in their only loss of the season.

It rained off and on for most of the first half, and Cherokee trailed North Duplin 7-0 at the half leaving some to remember the Murphy game.  Several journalists covering the game for Raleigh papers came up to me towards the end of the second quarter and asked what my thoughts were and could the Braves come back in the second half…

Well, when the third quarter started, it started sleeting and then turned to snow.

Cherokee opened it up and the rest is history.

The snow combined with a can-do attitude and a never-quit mentality from the players and coaches came together in a perfect storm, pun intended, for the Braves to bring home their first state championship trophy.

Boston Celtics great Larry Bird once stated, “Push yourself again and again.  Don’t give an inch until the final buzzer sounds.”

That’s what great teams and great comebacks are made of.