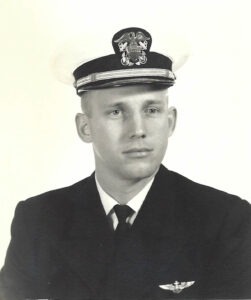 AVIATOR: Lewis H. Harding, an EBCI tribal member who served in the United States Navy as a Naval Aviator, is shown at the Naval Air Station in Jacksonville, Fla. in February 1965. During his time in the service, he received various decorations and awards including the Distinguished Service Cross and the Air Medal. (Photo contributed)

Lt. Lewis H. Harding, an EBCI tribal member, enlisted June 1957 in the United States Navy Reserve, and he completed basic training at Bainbridge, Md.  He was then assigned to the Naval Reserve Station located in St. Petersburg, Fla.

In 1960, he applied for and was accepted to Officer Candidate School at Newport, Rhode Island.  After six months of training, he was commissioned as an Ensign in the United States Navy on Aug. 17, 1960.

Ensign Harding attended Judge Advocate General School at the University of Virginia, and upon completion, he was assigned as a legal officer aboard the U.S.S. Shangri-La CVA 38.  This involved sea duty aboard a ship that was home-ported at Mayport Naval Station.  This duty was for an almost two-year duration.  During this time period, he took a competitive exam for Naval Flight School and was accepted for Aviation Flight School at the Pensacola Naval Air Station in Pensacola, Fla.  He completed Advanced Flight School at Corpus Christi, Texas.

In August 1963, he was designed a Naval Aviator and then attended Gunnery School at Lemoore Naval Air Station in California.

Upon completion of Naval Gunnery School, he received orders for Attack Squadron 165, Naval Air Station, Allimeda, Calif.  A request to Bureau of Naval Personnel to trade orders was approved, and Ensign Harding was then assigned to Attack Squadron 176 stationed aboard the U.S.S. Shangri-La CVA-38 which was operating in both the Atlantic and the Mediterranean Sea.  It was during this time that Ensign Harding flew several months of training flights in the Douglas AIH Skyraider.

In 1964, Carrier Air Wing 10 and Attack Squadron 176 were transferred to the U.S.S. Intrepid CVA-11 at which time the ship deployed to the waters off the coast of the Republic of Vietnam to conduct combat operations in support of ground forces.  Once on Dixie Station near Cam Ranh Bay, Attack Squadron 176 flew combat sorties and trained in the use of 20MM cannon and deployment of napalm canisters.

The time period conducting combat missions while on Dixie Station was mostly preparation for the more intense combat to be faced when they arrived on Yankee Station in the Tonkin Gulf of the South China Sea. 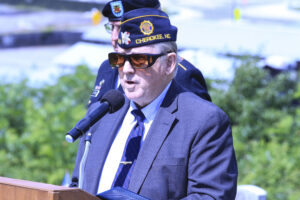 LEADER: Commander Lewis H. Harding speaks at the Cherokee Memorial Day observance in May 2017 at the Yellowhill Veterans Memorial Cemetery. He has served as Commander of the Steve Youngdeer American Legion Post 143 for 20 years.

Once on Yankee Station, combat sorties consisted of flying missions in A-1 Skyraiders and A-4 Skyhawks in the skies over both South and North Vietnam.  Many of these missions were flown over Hanoi and Hai Phong Harbor which, at the time, was considered the most heavily defended air space in the world.

Combat sorties also consisted of missions flown over the Ho Chi Minh Trail which was a major supply route south for the North Vietnamese Army. 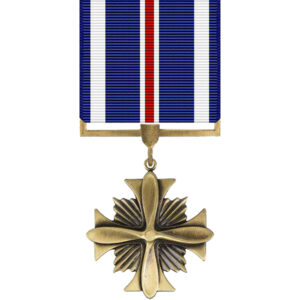 The Distinguished Flying Cross is awarded to a service member who distinguishes themselves by “heroism or extraordinary achievement while participating in an aerial flight”.

Lewis H. Harding has been the Steve Youngdeer American Legion Post 143 Commander from 1997 through 2017, a period of 20 years of faithful devotion to duty.

The Distinguished Flying Cross is awarded to a service member who distinguishes themselves by “heroism or extraordinary achievement while participating in an aerial flight”.

– Warren Dupree, One Feather staff also contributed to this report