AROUND THE REZ: Eddie Swimmer is a great ambassador for Tribe

When you can hold the attention of an audience of children and have them sit in awe, you’ve accomplished something.  Several months ago, Cherokee Central Schools held its annual pow wow in the Charles George Memorial Arena, and I witnessed such an event.

Eddie Swimmer, an EBCI tribal member, performed the hoop dance, and the entire arena full of students sat awestruck as he went through his routine turning the hoops into things we see in nature including a butterfly, an eagle, and even the entire world itself.  It’s something Eddie has been doing for years – captivating audiences with his dancing and his ever-present smile.

If they ever build a Hoop Dance Hall of Fame, he is sure to be a first-year inductee.  He won the inaugural World Hoop Dance Championship in 1991 held at the Heard Museum in Phoenix, Ariz.  In the past, he has gone back to serve as a judge for the event; something he will do again next month.  Through his efforts, he made the Eastern Band of Cherokee Indians synonymous with hoop dancing – a legacy that was carried on by fellow tribal member Daniel Tramper who won several titles at the Heard as well. 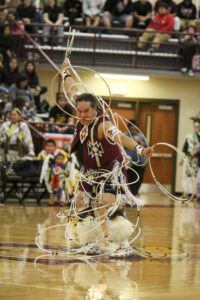 Eddie has been dancing for decades.  I recently saw a photo of him performing at the 1984 New Mexico State Fair in Albuquerque.  It is his passion and his demeanor that have carried him so far in this world.

And, he’s seen the world.

Eddie was one of the original members of the American Indian Dance Theatre which toured the globe in the 1990s and early 2000s.  He also performed at the 1996 Olympic Games opening ceremonies in Atlanta, Ga.

After traveling the world, Eddie came home and is making a huge impact on the community through his coaching.  He is the head coach of the Cherokee High School cross country and track and field teams.

Eddie’s workouts are strenuous.  They make me glad I’m a retired runner.  He pushes the young athletes to be all they can be and to push themselves.

Several seasons ago, when interviewing him for a pre-season piece I was writing on that year’s cross country team, he commented, “I’m really impressed with my team.  I see great potential in everyone that has come out.”

In that same interview, he went on to tell me, “I’m excited.  Each year, I think it is getting better and better.”

Well, Eddie with you at the helm that is true.  And, folks, he is excited.  His smile, energy, and enthusiasm are boundless.

Whether it is dancing totally engrossed with hoops or encouraging his athletes in the hot August heat or on a chilly March day, Eddie does it with class and style.

John Wooden, legendary UCLA men’s basketball coach, once said, “A coach is someone who can give correction without causing resentment.”

It was as if he had been talking about Eddie.