ON THE SIDELINES: Post-season honors for Mintz much-deserved 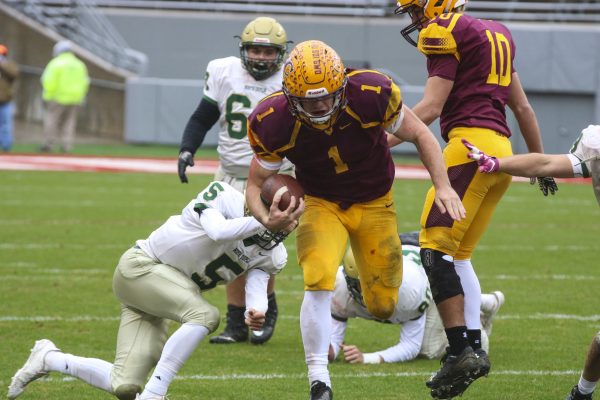 TOP BACK: Tye Mintz, Braves senior quarterback who was named Most Valuable Player in the state championship game (shown in photo), was named Smoky Mountain Conference Back of the Year as well as being named to the AP All-State team as an offensive athlete. He accounted for 51 total touchdowns this season. (SCOTT MCKIE B.P./One Feather)

Legendary Green Bay Packers coach Vince Lombardi once said, “People who work together will win, whether it be against complex football defenses or the problems of modern society.”

That’s exactly what the Cherokee Braves football team did this season, and we all saw the result of their efforts.  Winning the school’s first football state championship was the result of teamwork, and every team, every organization, needs a leader.  For the Braves, that leader on the field this year was Tye Mintz, senior quarterback.

Statistically speaking, he had an incredible year completing 105 of 178 passes for 2,040 yards and 18 touchdowns and rushing 164 times for 1,704 yards and 33 touchdowns – many of which were in the dirt and grit near the end zone where quarterbacks rarely tread.

For his individual efforts, Mintz received the following accolades: named to the Shrine Bowl, Smoky Mountain All-Conference team, Smoky Mountain Conference Back of the Year, and 1A State Championship Game Most Valuable Player.

Recently, he was also named to the Associated Press All-State team as an offensive athlete – the only player in all of western North Carolina to receive that honor.

Following the Braves’ win at Mitchell to clinch the 1A West Regional title and punch their ticket to state, Mintz told me in a post-game interview, “This is the best feeling I’ve ever had.  I can’t even describe it in words.  We kept our head up, and we kept fighting.  We kept putting our faith in our coach and God.  No matter how much adversity hit us, we kept coming right back at them.”

The day before that win, I took photos of the seniors and their mothers in a short photo shoot at Ray Kinsland Stadium.  The boys were calm and acted as if the next night was just another game – a perfect way to be.  I feel that a large part of the calmness the team exuded all season long was a result of Mintz’s demeanor.

Like I’ve written before, this year’s Braves team was the pinnacle of team unity.  Mintz was a large part of that.

John Madden, who won Super Bowl XI as coach of the Oakland Raiders, once said, “Any defensive coordinator is worried about two things: a running quarterback and a deep ball.  You know, don’t get beat deep and don’t let the quarterback run because a big part of your defense can’t account for the quarterback as a runner, so he gets a free run.”