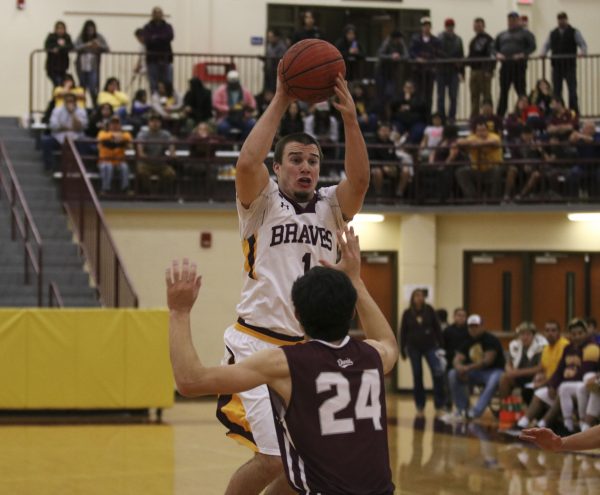 PASS: Tye Mintz (#1), Braves senior, jumps in the air to pass the ball as Swain County’s Seth Parker (#24) defends during a home game on the evening of Tuesday, Jan. 2. Mintz led Cherokee with 22 points and 12 rebounds.

Both Cherokee varsity basketball teams started the new year off right with home wins over rival Swain County on the evening of Tuesday, Jan. 2 at the Charles George Memorial Arena.  The Lady Braves improved to 3-4 on the year with a 71-63 win over the Lady Maroon Devils, and the Braves moved over .500 on the season (4-3) with a 65-51 victory.

“We turned the ball over way too many times, especially with them not really putting any pressure on us,” said Chris Mintz, Lady Braves head coach. “We’ve just got to get better at handling the ball and doing the little things right and I think we’ll be fine.”

Coach Mintz said the win could easily serve as a catalyst for their season, “It’s always great to beat Swain.  There were a lot of people here tonight.  We didn’t play our best, but we came out with a win and we just have to keep building off of every game.”

Following a slow start in the first few minutes, the Lady Braves jumped out to a 14-5 lead midway through the first and led 16-11 at the end of the quarter.  The Lady Maroon Devils came back and tied the game at 18-18 early in the second, but Cherokee went on a 13-4 run to lead 31-22 at the half.

Swain County came back again though and chipped away at the Lady Braves’ lead throughout the third, and Cherokee led 49-46 going into the final quarter.  Swain County tied the ballgame at 54-54 with 4:44 left, and Tori Teesateskie hit two three-point shots in a row to put Cherokee up 60-54 – a lead they would not relinquish.  Those shots sparked the Lady Braves who went on a 17-9 run to end the game and take the win. 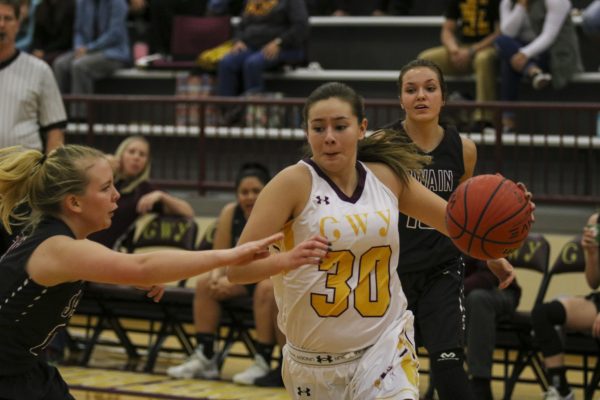 Teesateskie led Cherokee with 19 points, including four three-point shots, 10 rebounds, and 4 steals.  She was followed by Deante Toineeta 15 points and 3 steals, Timiyah Brown 13 and 3 steals, and Shelby Wolfe with 12 points and 8 rebounds.

Stats were unavailable for the Lady Maroon Devils.

“We’re still growing and getting them in the habit of doing things right all the time,” said Aaron Hogner, Braves first-year head coach.  “We’re making simple turnovers and just need to start playing consistently and getting rebounds.  I think teams are still out-hustling us.  There are a lot of things that we need to work on, but it was a big win.  We pulled it out so that’s a positive.”

The game stayed close through three quarters with Swain County leading 29-26 at the half and Cherokee leading 43-41 after the third.  The Braves came out in the fourth firing on all cylinders and outscored the Maroon Devils 22-10 to take the win.