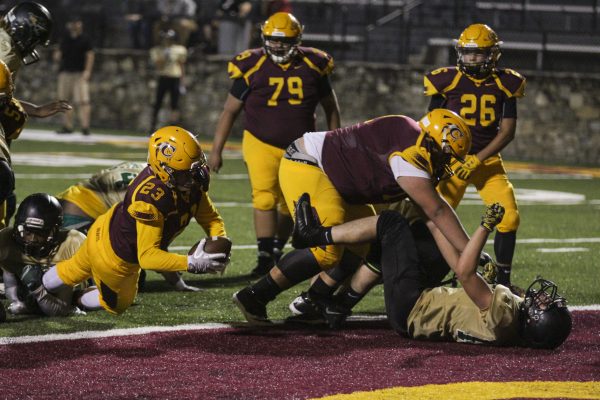 DIVE: Kyler Hill, Braves sophomore running back, dives into the end zone for a touchdown in the fourth quarter of a game against the Carolina Gladiators at Ray Kinsland Stadium on Friday, Sept. 22. (SCOTT MCKIE B.P./One Feather photos)

Cherokee improved to 5-0 on the season with a big win on Homecoming Night.  The Braves defeated the Carolina Gladiators (0-5) by a score of 53-6 at Ray Kinsland Stadium on Friday, Sept. 22.

Cherokee amassed 430 total yards of offense and averaged a whopping 17.2 yards per play while holding Carolina to 149 total yards (3.3 yards per play).  Carolina had three turnovers in the game (two fumbles, one interception) while the Braves were turnover-free on the night. 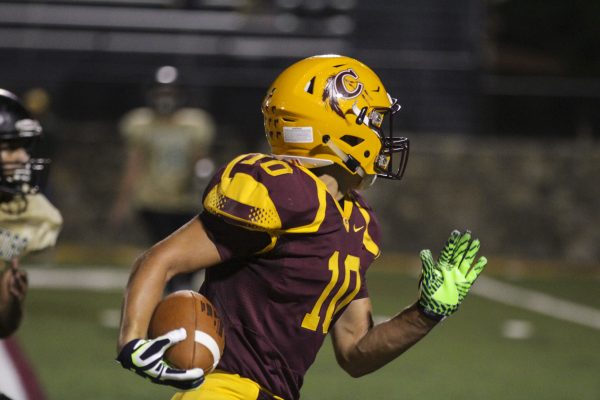 SPRINT: After catching a pass from Tye Mintz, Cade Mintz, Braves sophomore wide receiver, outruns everyone up the right sideline en route to a 40-yard touchdown.

Tye Mintz, Braves senior quarterback, was nearly perfect on the night completing 7 of 8 passes for 175 yards and three touchdowns.  Terence Ledford, junior running back, led the rushing attack for Cherokee with 7 carries for 158 yards and two touchdowns.  Cade Mintz caught three passes, two of which went for touchdowns, and had 72 receiving yards.

Kyler Hill, sophomore linebacker, led the Braves defensively with 9.5 tackles followed by Jaden Welch with 4 and Ledford and Cecil Walkingstick with 3.5 each.

Tristen Whitesides led Carolina with 20 carries for 99 yards.  J.Q. Whitesides carried the ball 15 times for 75 yards and the Gladiators only score on the night.

The game got going quickly as Cherokee scored four times in the first quarter.  Following an interception by Tye Mintz, the Braves drove down the field and Isaiah Evans ran in from six yards out for the game’s first score.  Several minutes later, Tye Mintz connected with Cade Mintz in the end zone on a 6-yard touchdown pass. 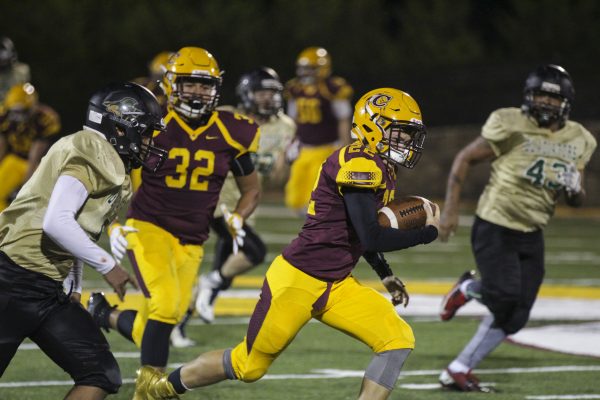 SCORE: Terence Ledford (#22), Braves junior running back, runs through the middle of the Gladiators defense on a 70-yard touchdown run in the second quarter.

Three minutes later, at the 4:09 mark of the first, Tye Mintz found Blake Smith sprinting down the left sideline for a 33-yard touchdown strike.  Then, with just over two minutes left in the game, Evans ran it in from one yard out to give Cherokee a 27-0 lead after the first quarter.

Midway through the second, Tye Mintz connected with Cade Mintz on a 40-yard touchdown pass.  Almost three minutes later, Ledford ran 70 yards for the longest score of the night to give the Braves a 39-0 lead at the half.

Three minutes into the third quarter, Ledford saw the end zone again as he ran 19 yards for a score.

Both teams would score once in the final quarter.  With just over 11 minutes left in the game, Hill dove into the end zone from the 1-yard line to make it 53-0.  The Gladiators did get on the board with two minutes left in the contest as J.Q. Whitesides ran it in from 7 yards out to round out the scoring at 53-6.

“Our real season starts now,” said Coach Briggs.  “We’ve done a nice job of earning what we needed to do to get ourselves in this position.  Now, we have to go out there and take care of business next week.”