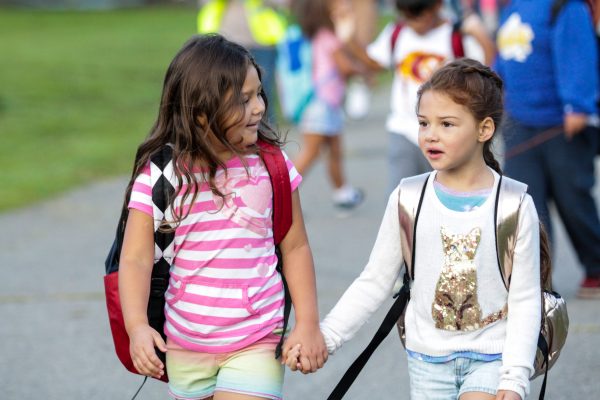 HEALTH: New Kituwah Academy students Aria Toineeta and Blaze Crowe participate in the kick-off of the Active Routes to School walking program at the school on the morning of Friday, Sept. 22. (SCOTT MCKIE B.P./One Feather)

Fifty-three students at New Kituwah Academy took advantage of the crisp, morning air on the first day of fall, Friday, Sept. 22, to get out for an early walk.  They were kicking off the Active Routes to School program which encourages them to get an active start to their day.

“The North Carolina Department of Transportation and the North Carolina Department of Public Health really are interested in getting kids moving before school,” said Jackie Moore, Active Routes to School Region 1 coordinator, who was at Friday’s kick-off event.  “What we’ve found is that if we can do a walking program before school for 15 to 20 minutes before they start classes, that it activates their brain.”

She noted that early morning workouts for students have many benefits.  “We see the retention.  We see them being able to recall things better.  Their grades are going up.  Their end-of-test scores are going up if they can walk just a few minutes every day.  We’re also seeing improvements in classroom behavior…it’s a win-win for everybody.”

The Active Routes to School program is a subset of the national Safe Routes to School.  “We have been working in 100 counties in North Carolina getting kids walking and biking ideally to school, but in the mountains where you can’t, we walk at school.”

Kylie Crowe Shuler, New Kituwah Academy principal, noted, “It helps get their minds and body ready for school.  We are going to do this once a week which will be ‘Walking Wednesdays’.  We’re very excited.”

Landon French, New Kituwah Academy physical education coach, commented, “This will help wake up their brains.  It makes sense as an early workout helps wake you up for the day and gets you ready.  It was explained to us that it will also help with behavior issues…as an early start, the workout will help out a lot.”

UNC Charlotte published a study in the journal “Movement, Health, and Exercise” in February entitled “Exercise before school benefits students throughout the day”.  The study found that students increased their math test scores and considered themselves more confident as a result of participating in a 15-minute aerobic exercise before school.

“It was powerful to hear how the students perceived the relationship between physical activity and being ‘ready to learn’,” Dr. Erik Byker, UNC Charlotte Department of Reading and Elementary Education professor, said in a statement.  “This finding reinforces the importance of daily physical activity during the school day, whether it is before or during school, as it prepares kids for the more traditional, sit-down type of learning.”

This program is set to kick-off at Cherokee Elementary School on Thursday, Sept. 28.