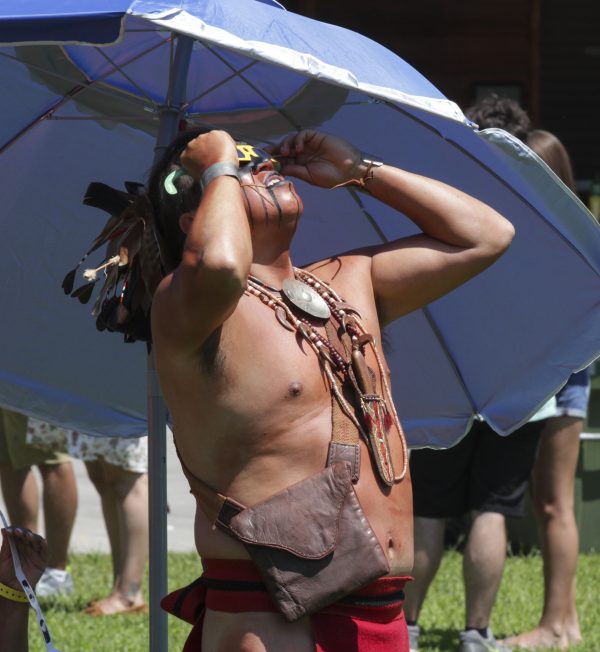 ECLIPSE FIGURES: Bo Taylor, a member of the Warriors of Anikituwah, views the early stages of the total solar eclipse during the Cherokee Cultural Eclipse Celebration at the Cherokee Indian Fairgrounds on Monday, Aug. 21. Cherokee tourism officials note that the event was a financial success. (SCOTT MCKIE B.P./One Feather)

Over 1,200 people watched the frog swallow the sun at the Cherokee Indian Fairgrounds during the total solar eclipse on Monday, Aug. 21.  The event, known as the Cherokee Cultural Eclipse Celebration, made money for the Eastern Band of Cherokee Indians and local hoteliers and businesses.

“I knew it was a success when I saw all of the interaction at the time of the eclipse,” said Lisa Frady, Cherokee Indian Fairgrounds events and tour group coordinator.  “Everybody got involved, and I feel that we really brought that legend to life.”

“As long as I’ve worked here, I’ve never seen a pro forma like this where we are actually in the positive and not the negative,” noted Frady.

She credits the uniqueness of the event for its success.  “Where we were able to incorporate our culture into the event, I think people bought into it.  I had a lady call me from Michigan that was bringing 13 people, and I jokingly asked, ‘could you not find one closer to go watch?’ She said, ‘not as unique as Cherokee.’”

Robert Jumper, EBCI Destination Marketing interim manager, had similar conversations with various people and organizations.  “NPR (National Public Radio) was trying to determine where they wanted to go to experience the eclipse.  So, they started calling around and I spoke to them.  I started talking about the music and what people would be doing at the event.”

NPR officials then asked what would be going on at eclipse time, “That’s when I got to tell the story of the frog swallowing the sun and that we would be using drums and noisemakers to drive out the frog.  It was at that point they decided to come to Cherokee to witness the eclipse.  People were identifying with that story and wanting to be a part of the Cherokee culture by coming and making noise to scare away the frog.”

Frady added, “I think the overall success of it was really good too because not everybody charged to view it.  I think we were one of the few places that did charge people, but we offered more than just the viewing.”

Jumper went on to say, “One of my favorite ways of telling how successful the event was is that every year at the Fair we have Jay Huskey’s food booth, and he sells frog legs.  He came to this event to sell frog legs, and he heavy-ordered around two or three times what he normally puts together for the Fair, and he ran out of frog legs.”