Tooni nominated for NAMMY Flutist of the Year 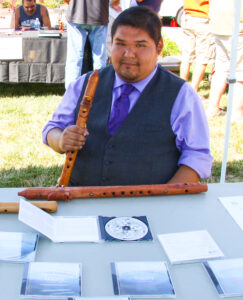 FLUTIST: Matt Tooni, an EBCI tribal member shown at the Cherokee Voices Festival, has been nominated for a Native American Music Award in the Flutist of the Year category. (SCOTT MCKIE B.P./One Feather)

Matt Tooni, an EBCI tribal member, has been nominated for a Native American Music Award (NAMMY).  His project entitled “Through Their Eyes Vol. 1” garnered him a nomination in the Flutist of the Year category.  This year’s award show is scheduled for Saturday, Oct. 14 at the Seneca Niagara Resort & Casino.

“It was a great experience working on this project, and I’m fortunate to have friends and family who were so eager to help and support this project,” noted Tooni.  “As for the recent nomination, I’m surprised. It’s a good feeling knowing there are people who think highly of you to nominate you for something.”

Over a year went into the project, and a Gofundme page helped him to raise $1,900 needed to finish the album.  The money helped ensure wrapping up the music recording in the studio as well as sending it to Discmaker to produce the final CD.

“My music is something that has become very important to me,” Tooni commented.  “I know that sounds cliche’, but it’s true. I have found an exceedingly great amount of inspiration from my culture. I believe that it helps me to express what I feel about that particular subject. Everything that comes from our hearts is genuine inspiration. That’s what my music is to me.”

He went on to say, “If I did not play from the deepest parts of my soul, then the music wouldn’t be as impactful. I want my music to paint a portrait with every detail being precise. I guess you could say it’s almost like going to watch a film. Only, the film is inside your head and the music allows you to feel that painting. That’s what I’d like to think my music is. I leave it all to the listener to decide. We all have different opinions on the matter.”

Tooni said he was happy to be nominated.  “I have been using social media to get people who know me and my music to go vote not just for me and my category, but to also see and vote for other native artists that are nominated as well. It is exciting and nerve-wracking at the same time.  It’s hard to believe I have come this far from just learning the flute and playing for the opening of the drama “Unto These Hills”, to being a performer at The National Folk Festival in Greensboro a few weeks ago.  And ultimately, I would love to hear my name announced winning this year.  If not, I will not be disappointed.  It has been a great ride, and there is no telling where my flute playing will take me in my life.”

Joining Tooni in the nominations for Flutist of the Year are: Jan Michael Looking Wolf (Kalapuya) for “Ascension”, Jonah Little Sunday (Navajo) for “Gratitude”, Randy McGinnis (Cherokee) for “The Journey – hi a vi si i”, Steven Rushingwind & The Native Groove (Cahuilla, Taino) for “Fuego”, and Vince Redhouse (Navajo) for “Songs of the Earth”.

Voting is still open at this site: https://www.surveymonkey.com/r/NATIVEMUSICAWARDS