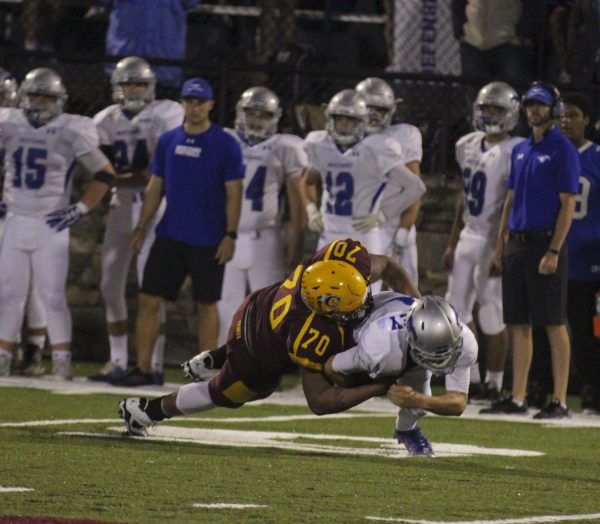 Byron Locust, Braves senior lineman, has a knack for getting a sack at just the right moment.  He sacked Smoky Mountain senior quarterback Nate Coffey late in the fourth quarter to help seal a 35-28 victory for Cherokee (4-0) at Ray Kinsland Stadium on Friday, Sept. 15.

Cherokee went up 28-14 in the fourth quarter, but the Mustangs came back with two successive scores to tie it up with just over five minutes left.  Isaiah Evans, Braves junior running back, scored on a 20-yard run, on which he was untouched, with 2:22 left in the game to lift Cherokee over Smoky Mountain.

“This game was emotional because we all have relationships, guys from Jackson County who are friends, who go against each other in basketball,” said Kent Briggs, Braves head coach.  “So, this type of game is very emotional.  We had to do a good job to make sure the emotions didn’t keep us out of the game and our game plan and what we need to do.  It was an emotional game and we had to stay composed.”

Coach Briggs said games such as these will only help his team down the stretch.  “I think it helps us learn how to play in a close game.  We haven’t played in a close game yet this year so I think that going in and playing in a really close game is going to help us knowing that if we stay composed, then we have an opportunity to win.  You’re not guaranteed to win, but it definitely gives you an opportunity.” 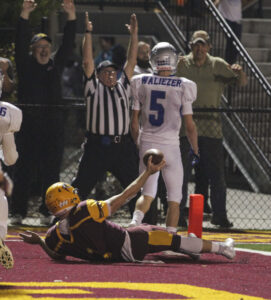 Evans helped lead Cherokee with 26 carries for 145 yards and two touchdowns.  Tye Mintz, senior quarterback, completed 8 of 10 passes for 139 yards and he ran the ball 17 times for 98 yards and three touchdowns.

Coffey completed 19 of 30 passes for 183 yards, two touchdowns, and one interception for the Mustangs.

Cherokee was led defensively by Locust and Joaquin Layno with six tackles apiece.  They were followed by Cade Mintz with 5.5 and Tye Mintz with 5.

The Braves scored twice in the first quarter to take an early lead.  Tye Mintz ran in from four yards out just a few minutes into the game, and then Evans ran for a three-yard score later in the quarter to give the Braves a 14-0 lead after one.

Early in the second quarter, Coffey ran in from one yard out to put Smoky Mountain on the board.  Then, with just over two minutes left in the half, Tye Mintz ran for his second score of the game to put the Braves up 21-7. 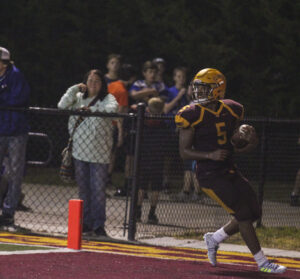 GO-AHEAD: Isaiah Evans, Braves junior running back, glides into the end zone for the winning touchdown in Friday’s game against Smoky Mountain.

Smoky Mountain roared back though, and with 39 seconds left in the half, Coffey connected on a 34-yard touchdown pass to C. Lominac.  Cherokee took a 21-14 lead into the locker room.

The third quarter was a punt-fest with both teams punting on their first two possessions.

Flash forward to the final 12 minutes.  Tye Mintz ran for his third score of the game on a 3-yard play early in the fourth.  Less than two minutes later, Coffey threw an 18-yard touchdown pass to E. Baldwin.

Following a Cherokee fumble, Smoky Mountain drove down and C. Lanning ran for a 15-yard touchdown to tie the game at 28-28 with 5:21 left in the contest.

Cherokee drove down and Evans put the nail in the coffin for Smoky Mountain with his 20-yard rushing score with 2:22 left.

On the night, Cherokee had 420 yards of total offense to Smoky Mountain’s 277.  Neither team was penalized much on the night.  Cherokee ended with six for 45 yards and the Mustangs had seven for 55 yards.

The Braves are at home again on Friday, Sept. 22 as they host the Carolina Gladiators for Homecoming Night.