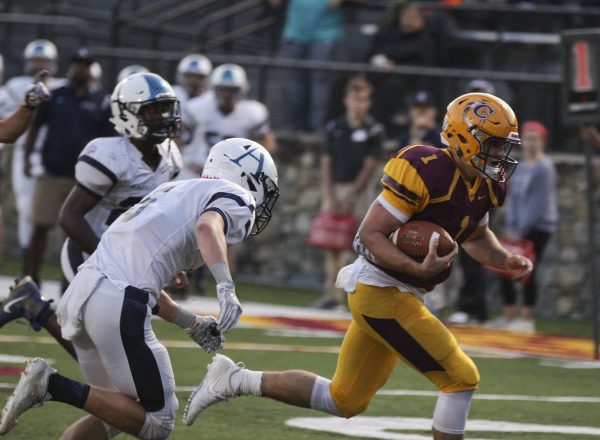 The Cherokee Braves (3-0) put up 508 total yards of offense as they shut out the Asheville School Blues 34-0 at Ray Kinsland Stadium on Friday, Sept. 8.  Cherokee averaged 8.1 yards per play on offense and held the Blues to an average of 4.1 yards and only 206 yards of offense.

“I feel really proud of our win here because I feel that that team was a better team than people would think,” Kent Briggs, Braves head coach, said following the game. “They had some really good athletes and good players.  And so, I feel proud that we went out there and performed and did what we had to do to win the game.”

Cherokee’s defense was led by Joaquin Layno, Byron Locust, and Damian Blanton who had 3.5 tackles apiece.  They were followed by Mintz and Evans with three each.  The Braves intercepted the ball three times in this game with Layno, Sterling Santa Maria, and J. Welch having one each.

Asheville School was led by Ahmad Gallimore, senior quarterback, who completed 10 of 27 passes for 131 yards and two interceptions.  He ran the ball 13 times for 34 yards.

The first half was riddled by penalties on both teams.  And, in fact, for the game both teams combined had 21 penalties for 200 yards (Cherokee 12 for 115 yards, Asheville School 9 for 85 yards). 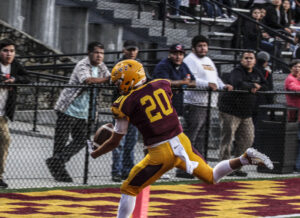 The Braves got things going well in the game as they marched 65 yards on the opening drive for a score.  Mintz connected with Holden Straughan, senior wide receiver, who made a one-handed grab in the end zone for a 27-yard score.  The extra point attempt failed, and Cherokee led 6-0 just three minutes into the contest.

Asheville School fumbled the ensuing kickoff, and the Braves set up shop at the Blues 37-yard line.  Several plays later, Mintz ran 19 yards up the gut for his first of two rushing touchdowns on the night.  Mintz connected with Cade Mintz for the two-point play, and the Braves took an early 14-0 lead midway through the first quarter.

Early in the second, Evans capped off a Cherokee drive with a gritty 4-yard touchdown run.  Zak Perez added the point-after kick, and Cherokee led 21-0. 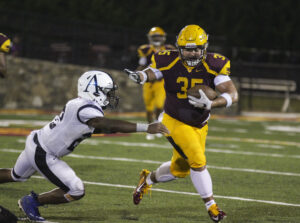 Cherokee scored twice on their next possession, but only one would count.  Mintz connected with Blake Smith on a 68-yard bomb down the left sideline, but the play was negated due to a holding penalty.  Three plays later, Mintz connected again with Cade Mintz; this time on a 66-yard touchdown pass down the right sideline.  Perez added the point-after kick, and the Braves took a 28-0 lead into the locker room.

Cherokee would score once more in the second half on a 17-yard run by Mintz to round out the scoring at 34-0.

Cherokee hosts Smoky Mountain (2-1) at Ray Kinsland Stadium on Friday, Sept. 15.  Last year, the Mustangs ran away with the contest; a fact not lost on the Braves team.

“Smoky Mountain is an excellent football team,” said Coach Briggs.  “They really embarrassed us last year.  We’ve got to go out there and play better than we’ve played all year to win that game.  So, we’ve got a lot of work to do.  We have to make sure that we’re ready to perform next week.  We’re looking forward to it, but we’ve got to have a good week.”