Dance is just one of the programs being developed in Yellowhill to build relationships, respect for others, and many social skills, while enjoying the art of dance. Many volunteers have offered free dance classes since June.  Some of the dances taught were a variety of line dances, rumba, and East Coast swing.  The next free dance lessons are adult clogging at Yellowhill Activity Center on Tuesdays in September at 6:30pm.

DANCC (Dance Association for North Carolina Communities) has sponsored two public dances at the Yellowhill Activity Center.  The most recent dance featured the Will Hayes Band on Saturday, Aug. 26. 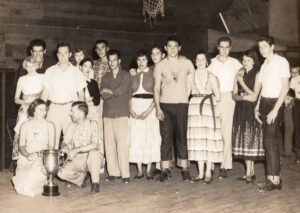 DANCING: Members of the DANCC (Dance Association for North Carolina Communities) are hoping that free clogging lessons at the Yellowhill Activity Center will begin a revitalization of square dancing in the Cherokee community that used to be very prevalent as evidenced in the photo above. (Photo courtesy of Sherri Booth)

Sherri Booth, one of the attendees and volunteer dance instructor, said, “The band was fantastic and provided a wide variety of music for many hours of enjoyable dancing.”

The next DANCC dance is scheduled for Saturday, Sept. 16 at the Yellowhill Activity Center.  Free dance lessons are at 6:30pm with the dance beginning at 7:30pm featuring the Rick Morris Band.

It is hoped by DANCC members that these lessons are the beginning of revitalizing square dancing in our communities. Free clogging lessons for youth will be planned for those interested.

Carmaleta Monteith recalls, “Years ago, square dancing in Cherokee and surrounding communities was a very popular activity.  As children, we formed square dance teams in school and they continued during teen years and later into adult life as evidenced by the square dance teams who competed at our annual Cherokee Indian Fair.  In addition, teams danced locally and traveled for competitions. The dances were more than a safe place for youth to socialize and it taught them how to build relationships, respect for others, and many other social skills. DANCC envisions that youth of today can enjoy those same aspects of dance.”

DANCC was organized as a non-profit organization for the purpose of rejuvenating dance as a social activity for community members and is open to anyone interested in promoting dance as a wholesome and fun activity.  The goal of DANCC is to offer free dance lessons and hold dances for all ages to attend.