A half dozen Cherokee youth spent a week this summer in the Pacific Northwest having great fun and learning some invaluable lessons. The trip was part of a domestic cultural exchange program sponsored by the Cherokee Youth Council. The young people visited three different Native American tribes, learning about their culture and teaching the tribes about Cherokee culture.

Ethan Clapsaddle is the new CYC coordinator; this was his first cultural exchange trip with the youth. He returned excited and eager to move forward with the lessons he learned. 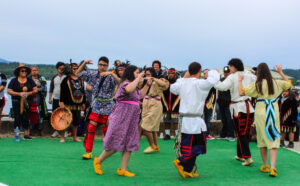 “For me as the new guy, it was awesome to spend time with the group to get to know them more closely,” said Clapsadddle. “And, seeing what other indigenous groups are doing, making new friends, and increasing our network really opens up our minds.”

The group spent time with the Suquamish, touring the cultural center and sharing songs and dance with small children at an early learning center. They visited Louis Gong at the 8th Generation Studio. Gong is a revolutionary native artist who graciously shared insights about cultural identity. Gary “Litefoot” Davis, a motivational speaker and Cherokee lobbyist, also met with the group.

“Gary spoke to our kids about empowerment, he said stop talking and start doing with passion, commenting that if you’re not passionate how can you expect anyone else to be. His talk was the highlight for several of the kids,” said Clapsaddle.

The youth traveled by ferry up Puget Sound to learn from the Lummi Tribe. They attended the Stommish Water Festival, an event honoring veterans and themed around the significance of water with parades, dancing, and a four-day canoe competition. They also experienced their first Bone Game Tournament.

“Many groups shared songs and dances, including our youth. Nate Crowe led some dances and told people about Cherokee history,” said Clapsaddle.

The Tulalip tribe was the final visit, and the group loved their cultural center and visiting their casino to view native artwork. The youth had the opportunity to see inside their longhouse where they hold celebrations and ceremonies.

Mike Thompson, a Jones-Bowman Fellow who works as a help desk support IT staff member for the Eastern Band of Cherokee Indians, used his Jones-Bowman stipend to travel with the group as a chaperone and cultural advisor. He made some insightful observations about the youth who attended.

“Our youth learned about a few of the dances the other groups did, and watched kids their age doing them,” said Thompson.  “They realized that it’s ok to do that, that it’s cool and not weird. They also learned that we are on the verge of losing everything if they don’t take an interest in their own culture. Youth Council is very valuable.”

Clapsaddle added, “When our youth see their peers doing the same activities, trying to be more cultural in a modern world, it comforts them and builds confidence. One of our Youth Council members told me she sees how the communities we visit are strong culturally and traditionally, and she wished ours were as strong. Our community is strong, but sometimes we don’t see it. It is our hope that by working with the youth through cultural programs and stronger community ties, they will begin to see just how strong we are culturally.”

The Cherokee Youth Council plans to continue the domestic Cultural Exchange program next summer. They have big plans for next year, and lessons learned from this experience are already in place. Based on the youth’s observation that Cherokee culture didn’t seem as strong as some other native tribes, the group recently visited the Museum of the Cherokee Indian and received a behind-the-scene tour that helped them better appreciate Cherokee history and culture.

The Cherokee Youth Council is a program under the Ray Kinsland Leadership Institute, a department of the Cherokee Boys Club. It is funded by the Cherokee Preservation Foundation.