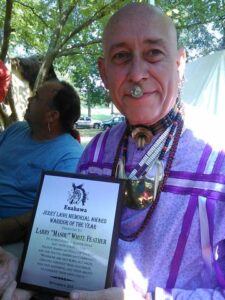 The referred trip to New Zealand for a cultural exchange had been organized by Two Feathers International Consultancy and one of the co-founders of TFIC, Doreen Bennet of the Maori tribe.  It was not lead or organized by Mashu White Feather but by our organization.

It doesn’t seem ethical for another individual to assume or judge who is of what heritage. He is certainly not privy to Mashu’s family history or genealogy.  It is not up to this individual to decide what heritage Mashu is or is not.  Mashu has been brought up throughout his childhood as being of Cherokee descent. He was taught from a young age by his parent’s many traditions.

Mashu has never claimed to be a speaker for the Cherokee people or representing Eastern Band, Western Band or the UKB. He only speaks of his personal upbringing and represents our organization when speaking.

Mashu White Feather does not refer to himself as a Cherokee elder. Others may have done so and Mashu does correct them. We and or Mashu cannot control what individuals may refer to him as. We can only correct the statements. It is interesting to read that this individual (and he has stated that he is not of Cherokee heritage) did not see fit to correct the perceived “inaccuracies” of Mashu’s speaking.

Although we can appreciate Mr. Mason’s apparent need to issue a public apology for any misrepresentations he might have conducted, we are perplexed on why he would include someone else into the apology and with misleading, false statements.

We do hope that we have shed clarification upon these statements which TFIC believes are untruths and should have the opportunity to be corrected in the public eye.