“Lenoir-Rhyne has a great history, and we want to build upon it,” Williamson said in a statement.  “I want to give credit to former coach Jason Stewart and his staff for the outstanding accomplishments they achieved over the past 16 years.  Moving forward, we want to take that formed foundation and build something special that Lenoir-Rhyne University will be very proud of.” 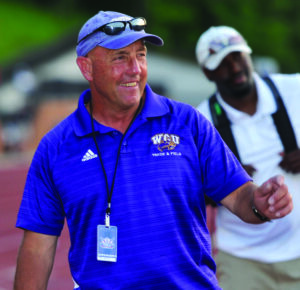 DEPARTING: Danny Williamson, who served as the Cherokee High School head cross country and track and field coach for the 2016-17 season has accepted a position over those programs at Lenoir-Rhyne University. (Photo courtesy of Lenoir/Rhyne)

Kim Pate, Lenoir-Rhyne director of athletics, said in a statement on Wednesday, “This is an exciting day for the Bears as we welcome Danny Williamson, a legend in the track and field coaching ranks, to assume leadership of our cross country and track and field programs.  He is the ideal candidate to build on the great foundation that Coach Jason Stewart established while taking our programs to the next level.  Coach Williamson is a relentless recruiter, a great teacher and motivator, and is known for getting the absolute most out of his student-athletes.”

Eddie Swimmer, who served as co-head coach with Williamson at Cherokee this past season, commented, “First, it was an honor to have Danny come and work with our program.  It was great to have someone we all could talk ‘shop’ with and bounce ideas around.  And, he helped bring the running program up to another competitive level.”

He added, “I hate to see him leave, but this opens up many other opportunities for our program.  Cherokee High School does have one athlete there at Lenoir-Rhyne already.  Who knows, we could send Danny some more athletes.  I, as well as my coaching staff, wish Danny the best!”

Prior to coming to Cherokee, Williamson coached almost 30 years at Western Carolina University, a position he retired from in June 2016.