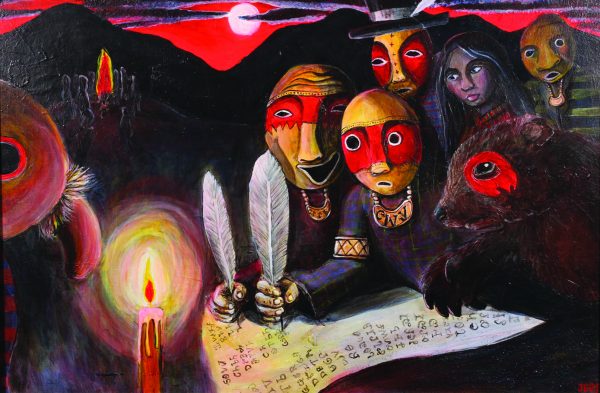 RETURN: Cherokee Nation citizen Joseph Erb’s “Petition”, an acrylic on canvas, is one of the pieces featured in the “Return from Exile” Native American art exhibit that recently received a $25,000 grant from the National Endowment for the Arts. (Image courtesy of WCU)

The National Endowment for the Arts has awarded a $25,000 grant in support of a contemporary Native American art exhibit scheduled for display at the Western Carolina University Fine Art Museum from Aug. 21 through Dec. 8.

It is the first NEA grant awarded to the museum in its 12-year history, after opening in 2005 with a mission to serve Western North Carolina. The Fine Art Museum is located in WCU’s John W. Bardo Fine and Performing Arts Center.

“Return from Exile” is one of the first major exhibits to focus on contemporary artists from tribal nations with a historical connection to the southeastern U.S. These include the so-called “Five Civilized Tribes” of Cherokee, Choctaw, Chickasaw, Creek and Seminole, who were forcibly removed to present-day Oklahoma as a result of the Indian Removal Act of 1830. The exhibit represents the return of the artists to their ancestral homelands.

“The arts reflect the vision, energy and talent of America’s artists and arts organizations,” said Jane Chu, NEA chair. “The National Endowment for the Arts is proud to support organizations such as the Western Carolina University Fine Art Museum in serving their communities by providing excellent and accessible arts experiences.”

The NEA, an independent federal agency established by Congress in 1965, is dedicated to supporting excellence in the arts, both new and established; bringing the arts to all Americans; and providing leadership in arts education. Criteria for grant selection includes projects that have strong public engagement, encourage lifelong learning in the arts and strengthen the community through the arts.

“The WCU Fine Art Museum has been honored to receive funding from the North Carolina Arts Council, Jackson County Arts Council and regional foundations for many years,” said Denise Drury Homewood, executive director of the Bardo Arts Center. “With a grant award from the National Endowment for the Arts, we now also have funders at the national level who acknowledge the significant work we’re doing here in Cullowhee.

“I believe that one of the most impactful elements of this specific project is our commitment to community engagement,” Drury Homewood said. “Members of the ‘Return from Exile’ local arrangements committee including Yona Wade, Lambert Wilson, Jeff Marley, Lynne Harlan, as well as Eastern Band of Cherokee Principal Chief Richard Sneed, have provided valuable support and helped to shape the project.”

Harlan, a public relations officer for the Cherokee Indian Hospital, has extensive experience with Native American art, having previously served as a curator at the Institute of American Indian Art in Santa Fe, New Mexico, and as a collections manager at the National Museum of the American Indian in New York.

Harlan said the NEA grant represents more than funding.  “Western Carolina University’s proximity to the Eastern Band of Cherokee Indians makes it an ideal location to present public programs, which will engage our community and inspire our students,” she said. “It will also provide our neighbors with an opportunity to see important contemporary art that might otherwise be available only in other regions of the country. The opportunity to bring world-class artists to the area is also unique and can provide one-of-a-kind educational presentations. The accompanying catalog will serve as a resource for our educators beyond the length of the exhibition at Western Carolina University.”

As an educator, Chief Sneed said he can appreciate the lessons of art not only for the region’s youth but for all of the community. “I look forward to working with the WCU Fine Art Museum and WCU to bring innovative public programming to our schools throughout the exhibition time. These types of collaborations are vital to attracting students to higher education. A few of the participating artists are members of our tribe, and it is my hope that our community will appreciate their art in the context of national prominence.”

Regional and national artists and scholars will come together to discuss contemporary Native American art during a symposium beginning at 9am on Friday, Nov. 10. A reception for the exhibition will take place from 5-7pm that day, followed by a performance by “A Tribe Called Red,” a First Nation DJ collective from Canada performing culturally based electronic music.