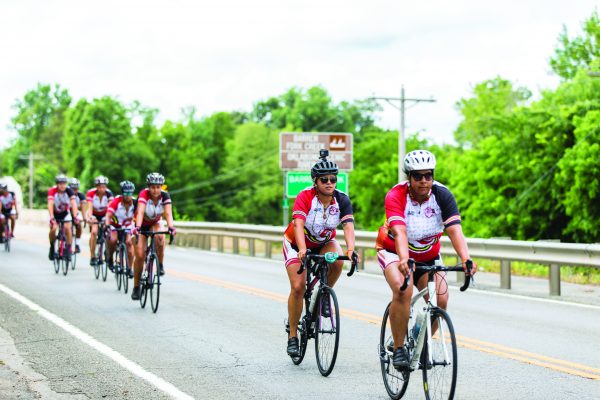 LAST STRETCH: The Remember the Removal riders complete their last leg of their journey en route to Tahlequah, Okla. on Thursday, June 22. Sheyahshe Littledave and Chavella Taylor, both EBCI tribal members, can be seen at the front of the pack. (Photo by Kristy M. Herron/EBCI Communications)

The ride started on June 4 in New Echota, Georgia, the former capital of the Cherokee Nation prior to removal. The 14 Cherokee Nation cyclists and six Eastern Band of Cherokee Indian cyclists rode nearly 1,000 miles across seven states.

“When I look out at these fine young adults today, I see a perseverance that carried our people from the old homelands to the new homelands. It is a perseverance that allowed our ancestors to not just survive, but prosper in their new home. I see that same Cherokee perseverance in these young men and women today,” said Principal Chief Bill John Baker. “Many times they have been asked, ‘Why are you doing this?’ with the answer always being, ‘To remember our ancestors and what they overcame.’ I commend each and every one of these riders for honoring them and showcasing the strength of the Cherokee people.”

The original Remember the Removal Bike Ride was in 1984, with the leadership program resuming as an annual ride in 2009. Cyclists learn about Cherokee Nation history, language and culture and get a glimpse of the hardships their ancestors faced while making the journey on foot. 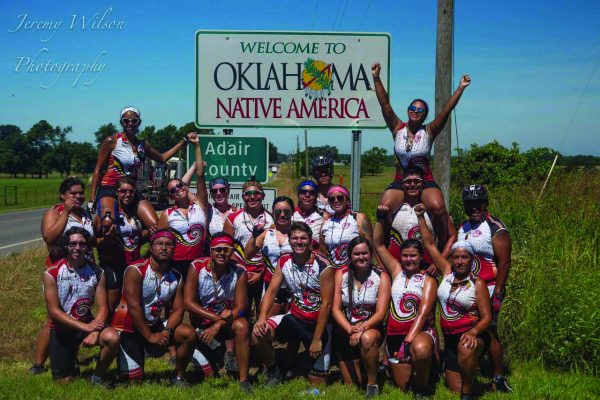 OKLAHOMA BOUND: The group is shown at the “Welcome to Oklahoma – Native America” sign as they entered Adair County, Okla. (Photo by Jeremy Wilson)

This year, 33 years after the original ride, Will Chavez, a member of the 1984 group and assistant editor for the Cherokee Phoenix, joined the 2017 participants to serve as the inaugural mentor rider.

“I really took being a mentor to heart. I wanted to encourage them and lead them the best I could,” said Chavez, 50. “I knew what it would take to come out here. You run through a lot of emotions. It’s tough.”

Throughout their journey, the Remember the Removal Bike Ride participants visited historical landmarks that were important to Cherokee people, including Blythe Ferry in Tennessee, which was the last part of the Cherokee homeland walked by the ancestors before beginning their journey into Indian Territory, and Mantle Rock in Kentucky, which provided shelter to many ancestors as they waited for safe passage across the frozen Ohio River. 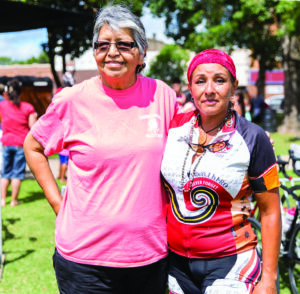 CONGRATS: Shirley Oswalt, EBCI Beloved Woman from the Snowbird Community, is shown with EBCI rider Renissa McLaughlin at the completion of the ride in Tahlequah on Thursday.

“From the first day of the ride up to today, I have become so much closer to my teammates,” said Cherokee Nation citizen and 2017 Remember the Removal Bike Ride participant Breanna Anderson, who will attend Oklahoma State University Medical School in the fall. “Learning about what my ancestors went through made me more appreciative and respectful of their journey. Cherokees are not gone, and those that passed will not be forgotten.”

Of the estimated 16,000 Cherokees forced to make the Trail of Tears journey to Indian Territory, approximately 4,000 died due to exposure, starvation and disease.

The 2017 Remember the Removal Bike Ride cyclists included the following:

The 2017 Remember the Removal Bike Ride is chronicled on Facebook at www.facebook.com/removal.ride.