Tribal elders in Indian Country are reportedly abused at a rate (1 in 4) much higher than the national average (1 in 10).  This and other facts and statistics about elder abuse were given during an Elder Abuse Awareness Walk on the evening of Thursday, June 15 at the Tsali Manor walking track.

The EBCI Family Safety Program Adult Protective Services (FSP-APS) reported they have received 155 reports from the program’s inception on Oct. 1, 2015 to May 31, 2017.  Of those, 61 have been substantiated, 87 were unsubstantiated, and seven are currently still under APS investigation. 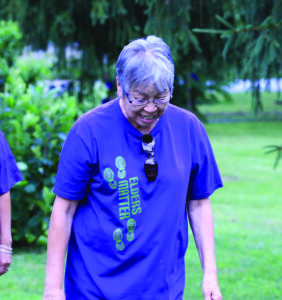 AWARENESS: Jody Taylor, an EBCI tribal elder from the Birdtown Community, joined others for an Elder Abuse Awareness Walk on the evening of Thursday, June 15 at the Tsali Manor walking track. The event was held to raise awareness of the growing problem of elder abuse in Cherokee and nationwide. (SCOTT MCKIE B.P./One Feather)

According to their statistics, financial exploitation is the number one reported type of abuse with 80 total reports followed by self-neglect 73, caregiver neglect 36, physical abuse 20, hoarders 5, verbal abuse 5, and sexual abuse 1.  (Note: Per APS, “A report may have more than one type of allegation; therefore, the total numbers of allegations are higher than the number of reports.”)

The number of reports for FY2017 has already surpassed last year’s figures.  From Oct. 1, 2015 – Sept. 30, 2016, there were 59 total reports.  From Oct. 1, 2016 – May 31, 2017, there have been 96 total reports.  In those, 43 percent of the alleged perpetrators were family members and another 43 percent were classified as caregiver/residential management.  Ten percent of the alleged perpetrators were friends or neighbors and the remaining 4 percent were classified as “other”.

“Anytime that we can bring awareness to our community and our peers about very important issues, it’s important that we do that,” said Principal Chief Richard G. Sneed during Thursday’s event.  “Coming together, as a community, to demonstrate our unity when faced with these issues really just demonstrates who we are as Cherokee people.”

APS breaks elder abuse into three main categories as such:

“Elder abuse is taboo in most societies as we know and especially in tribal communities,” commented Tim Lewis, EBCI Legal Assistance Office legal services attorney, who was the guest speaker for the event.  “People do not speak of elder abuse.”

Lewis went on to encourage people to report suspected elder abuse.  “Don’t just keep it under wraps because the more that happens, the less likely that anything is going to actually happen and prevent abuse from occurring.”

He noted that around 16 percent of the population of the United States is currently age 65 and over.  “That number is expected to grow to about 20 percent in the next ten years.  If you think of the number of elders that exist and the amount of abuse that occurs, it’s astronomical.”

A total of 10 percent of elders in the U.S. have “suffered abuse in one shape or another” said Lewis who noted that percent jumps up to 25 on tribal lands in the country.  “That is something that we need to take those steps and prevent.  We need to do whatever we can to help our elders.  We love our elders.  We care for our elders, but we really need to limit the amount of abuse that occurs.”