The Zika Virus has only hit the United States in small doses, but Cherokee health officials are warning EBCI tribal members to be careful when traveling to areas where it is active.  The virus, spread mostly through the bite of an Aedes species mosquito or by sexual contact, is not considered life-threatening to most, but it can have serious effects on unborn fetuses.

“Zika is not being locally transmitted, and we don’t have the type of mosquito that would allow that as of now,” said Abby Holmes, EBCI Public Health and Human Services public health preparedness coordinator.

The CDC previously designated several places in the United States as Zika cautionary areas – Miami-Dade County, Florida, whose cautionary designation was removed June 2, and Brownsville, Texas which still is under the designation.  The CDC currently advises pregnant women to “consider postponing travel to Brownsville” due to the possible threat. 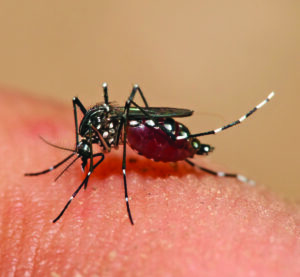 Spread by the Aedes species mosquito, the Zika Virus was first discovered in 1947 in Uganda according to the CDC. (Photo by Muhammed Mahdi Karim)

“Right now, there is no local transmission in the U.S., but they are anticipating that there will be again in Florida as we go through summer,” Holmes noted.  “So, what we need to be concerned about locally is travel – travel into areas with active transmission.  Make sure you try to avoid getting mosquito bites if you travel to an area with Zika.  Be aware that it is also sexually transmitted.”

Prior to traveling, Holmes advises checking the CDC website (https://wwwnc.cdc.gov/travel/page/zika-travel-information) to view the most up-to-date information and warnings/advisories.

Zika is particularly dangerous for pregnant women.  The CDC states, “The Zika virus can be passed from a pregnant woman to her fetus.  Infection during pregnancy can cause a birth defect called microcephaly and other several fetal brain defects.”

Holmes said that those with the Zika Virus many times do not know they have it.  “Most people don’t present symptoms, so a lot of people don’t know that they have it.  But, the symptoms are fever, rash, headache, and joint pain similar to the flu.  So, definitely go see your physician if you’re concerned at all.”

Lacrosse encephalitis (LACV), another mosquito-borne illness, can cause inflammation of the brain and has been much more common here in western North Carolina.  “I think encephalitis is probably the biggest concern of mosquito bites in this area,” said Holmes who said the rates of this and other mosquito-borne illnesses increase yearly.  “Everyone should definitely be protecting themselves from mosquito bites, especially children.”

To lessen your chances of receiving mosquito bites, the CDC recommends the following:

Even though the incidences are increasing, the CDC reports that there are still only around 80-100 cases of reported in the United States annually.  “LACV disease cases occur primarily from late spring through early fall, but in subtropical endemic areas, e.g., the Gulf states, rare cases can occur in winter,” CDC information states.

The CDC also states that while there is no vaccine or preventative drug for LACV, less than 1 percent of all cases are fatal.