Principal Chief Richard G. Sneed gathered employees of the Eastern Band of Cherokee Indians together on the morning of Tuesday, June 6 in the Chief Joyce Dugan Cultural Arts Center to lay out his vision for his administration. The event started with a short film, produced by the EBCI Communications Department, whose message centered around the lyrics and music video style of the song “Right now” by Van Halen.

“In everything that has happened over the last few months, I think everyone has had some anxiety,” said Chief Sneed who said now is the time for healing and forgiveness.  “It’s time for us to come together.  It’s time for us to be a Tribe again.” 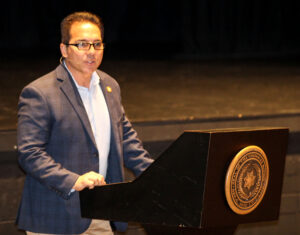 One of the first areas Chief Sneed touched on during his speech on Tuesday morning was human resources.  “My commitment to every one of you, as a tribal employee, is that our HR (human resources) policies will be followed.  That is my promise to you.  HR policies are not just in place so that you know what our expectations are of you.  But, it is important that you know what you can expect from us.”

He said the hiring process, which goes along with the human resources policies, will be followed.  “As you can imagine, my phone has blown up the past week.  Many people have been saying, ‘Hey, I’m so glad you’re there.  I need a job.’  And, I understand that, but my response has always been the same since I took the office of Vice Chief.  Apply, there’s a process.”

Another major area he touched on was housing.  “We spend a lot of money every year on housing, millions of dollars, and we put very few homes on the ground…there are some very serious challenges that we face in housing.”

Chief Sneed said he is currently planning a Housing Summit to get everyone involved in housing for the Tribe together for a day of input, listening, and problem-solving.  “We’re taking a collaborative approach to correct the shortfalls of our overall system.  It’s like anything else.  The system, over the years, has grown with not a lot of real direction.  And, when organizations just grow with no direction, you create bureaucracy and things tend to just bog down and things don’t get done.”

He said his administration will adhere to what he calls the “Three Cs” which are communication, collaboration, and community.  “No one has all the answers,” he noted stating the need for both communication and collaboration between tribal programs and departments.  “It takes all of us working together to make this thing work.” 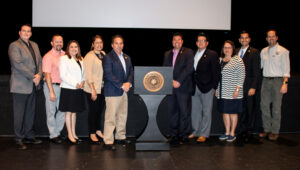