Remember the Removal riders get send-off at Kituwah 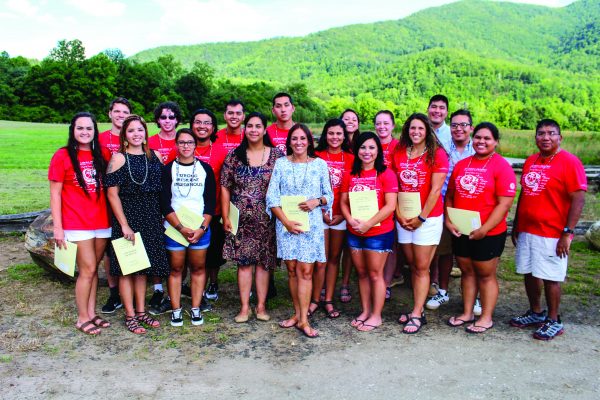 Annually, the Remember the Removal riders gather at the Kituwah Mound, the Mother Town of the Cherokee, prior to embarking on their 950-mile journey to Oklahoma.  The group received a send-off during an event held at the Mound on Friday, June 2. 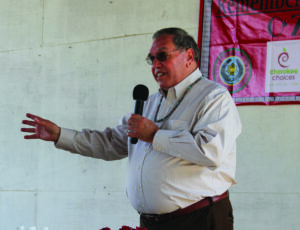 HISTORY: Jack Baker, Cherokee Nation Tribal Council At-Large Representative and president of the National Trail of Tears Association, talks on the historical significance of the ride.

“It’s fitting that the riders from the west and the Eastern Band meet here because this is our common ground,” said Jack Baker, Cherokee Nation Tribal Council At-Large Representative and president of the National Trail of Tears Association.  “This is our ancestral home.  All of us here have ancestors that are buried in this area.”

He went on to speak of the connection between the riders.  “More than half of our riders (Cherokee Nation) come from Delaware County (Okla.) whose ancestors actually came from North Carolina.  So, it’s fitting that we come together at this site.”

Principal Chief Richard G. Sneed, a Remember the Removal alumni from 2014, told the riders, “You’re about to embark on a journey that’s going to forever change you.” 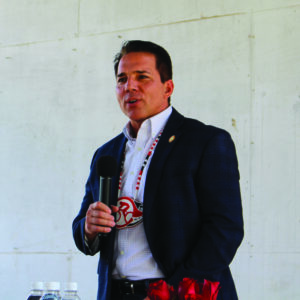 He added, “It’s going to change your perspective about what it means to be Cherokee.  It’s going to change your perspective about life because you’re going to endure things along this journey.  There will be days when that little voice in your head will tell you that you can’t do it, that you need to give up.  On those days, draw on each other’s strength.  Draw on the strength of our ancestors.  Draw on the strength of the alumni that have gone before you.  You will make it, and when you get to the end of this journey, you’ll be forever changed.”

Taylor Wilnoty, EBCI rider, said she is nervous going into the ride as it will be her first time away from home on her own.  “I’ve always traveled with my mom or my family; so, definitely I’m really nervous about being on my own.  I’m really excited though.  I’ve never done anything like this, but when I started this, it was for myself.  Through training, I’ve obtained a lot more of myself, and on the ride I really just want to get a better appreciation of my home and who I am and where I come from.”

Fellow EBCI rider Sheyahshe Littledave said she is both nervous and excited to start, but said their training has gone well.  “I feel like I’m as prepared as I can be for the physical aspect.  I’m excited about the cultural part of it because, I’m ashamed to say, there’s a lot of stuff that I don’t know about our history and our culture that I would like to learn.”

She credited her family and the ride alumni for helping her get ready for the ride.  “To think that I’m about to embark on a 900-mile journey is exciting and mind-blowing, but I really hope to gain  a lot of memories, a lot of friends, and a new sense of self.”

Chavella Taylor, EBCI rider, commented, “I hope to find a better connection to who I am and where I come from.  I hope to learn all that I can on the way and be able to bring that back.  I hope that I come back with a family, not only here, but there.  And, I hope that by us riding, it shows our Tribe that we still care and that we’re encouraging all of the tribal members that we’re still here and we can do anything.”

The rider’s schedule this year, according to information from the Cherokee Nation, is as follows: 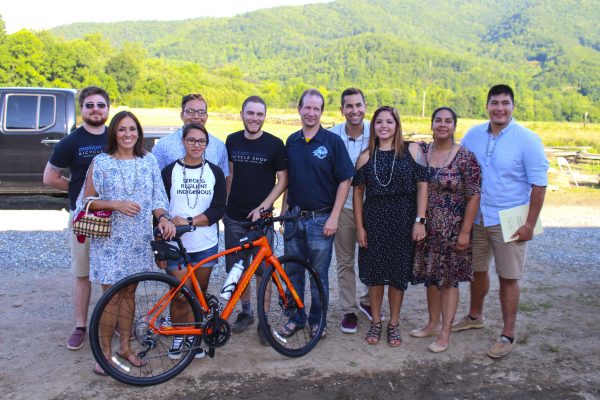 The Remember the Removal Riders from the Eastern Band of Cherokee Indians are shown with staff from Motion Makers who helped with their bicycles this year.