“A debt that can never be repaid”: Cherokee honors fallen warriors on Memorial Day 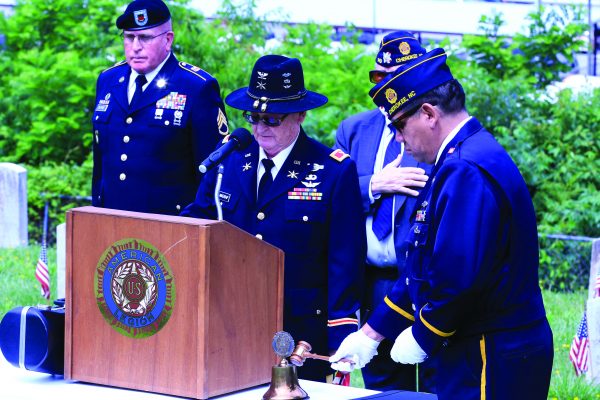 The headstones at the Yellowhill Veterans Memorial Cemetery were decorated with the red, white, and blue of American flags on Monday morning.  The Steve Youngdeer American Legion Post 143 hosted a Memorial Day observance at the site on Monday, May 29.

“This day is sacred with the almost visible presence of our brothers and sisters who have gone before,” said Post 143 Commander Lew Harding.  “We honor them here today, and we honor their memory – those who gave their lives in the service of their country and the others who have dropped their burdens to the wayside of life and have gone on their eternal rest.” 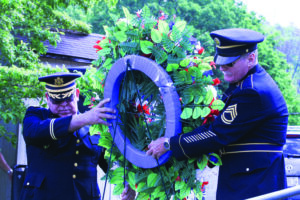 He added, “Each year, on Memorial Day, our country pauses to remember the Americans who gave their lives to our country.  But, in a sense, to the families who have lost loved ones, every day is Memorial Day.  May we remember with pride and sadness those family members who paid the price for our freedom in lost dreams and lost lives.  On Memorial Day, we should all pause to remember those who gave all of their tomorrows to ensure that ours would be free.”

During the ceremony, Col. Bob Blankenship (Ret.), U.S. Army, read a list of names (see below) of EBCI tribal members killed in action in World War I, World War II, Korea, and Vietnam.  After each name was read, J.D. Arch, EBCI veterans service officer, rang a bell in their honor.

A wreath was laid in the cemetery, in honor of the fallen warriors, by Col. Blankenship, Maj. William Underwood, SFC Alva Brown, and SFC Clifford Long.

“Freedom comes at a price, and many times that price is very high,” Commander Harding went on to say.  “For those of us that remain, it is our duty to ensure that those men and women, past and present, are honored for their service and that future generations are inspired by their heroic actions in support of our country.  There is nothing more powerful and reverent than walking amongst the white crosses or white monuments in a veterans memorial cemetery reflecting on the courage and sacrifice of these brothers and sisters – our fallen warriors.  We do indeed owe them a debt that we can never repay.”