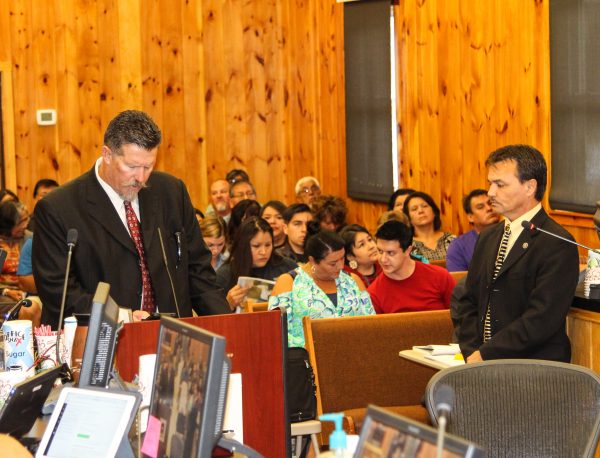 Tribal Council found Principal Chief Patrick Lambert guilty of eight of 12 Articles of Impeachment on Thursday, May 25 – the fourth day of an Impeachment Hearing.  Immediately following the vote on those articles, Council passed Res. No. 596 (2017) by a vote of 9-3 that approved the immediate removal of Chief Lambert as Principal Chief and the installation of Vice Chief Richard G. Sneed into the top position.

Voting on the Articles of Impeachment went as follows (weighted votes in parentheses):

After the verdict was read and a short break was taken, Cherokee Chief Justice Kirk Saunooke was brought to the Council House to administer the Oath of Office for Principal Chief to Vice Chief Sneed.  A raucous crowd in the Chambers interrupted that from happening, and they moved to the Cherokee Tribal Courthouse where the Oath was administered.

Following the impeachment proceedings, former Principal Chief Lambert addressed some of his supporters from the Council House steps and commented, “I appreciate everyone coming out today and all of the time we’ve had together.”

He said he ran for the Office of Principal Chief to try to clean up corruption within the Tribe and said that led to his impeachment.  “What does it boil down to? It boils down to greed, corruption, and money.  Because there are a couple of members of Tribal Council there now that think they’re going to become Vice Chief.  And, you know what? It’s a violation of the Charter.”

He stated, “Now, did that happen today? It did not!  I’m still standing here fully capable.  I’m not dead…they impeached me saying I violated some sections of the Code, but what they’re going to do on their very first act is a violation of the Charter.”

The impeachment proceedings began on Monday, May 22 following months of legal wranglings, both inside the Council House and the Tribal Courthouse.

Rob Saunooke, an EBCI tribal member and attorney living in Florida, served as the Special Prosecutor for the impeachment.  In his opening statement on Monday, Saunooke commented that he has been a part of every impeachment proceeding in some capacity.  “I think the Council has seen enough, and we have enough information of a pattern of behavior, a method by which the Principal Chief has decided to operate as the Chief of the Tribe that violates not only his Oath of Office but the traditions and customs of our Tribe and threatens the ability of the Tribe to move forward in any manner, way, shape, or form.”

Scott Jones, an Asheville-based attorney, represented former Chief Lambert in the proceedings.  During his opening statement, Jones said, “I’ve been coming to Cherokee, as an attorney for 25 years.  Today is the saddest of the trips I’ve made here.  Long before I was a lawyer, I was raised by my parents to believe in fairness.  When I went to law school, I learned that lawyers call that due process.  But, fairness was something that I had with me long before that.”

He added, “The reason I say today is the saddest day is because I came here believing that you have already made up your minds before you’ve heard any evidence.  That’s not fairness.”

Read the timeline of events in these various One Feather articles on the impeachment to see how we got to where we are today: