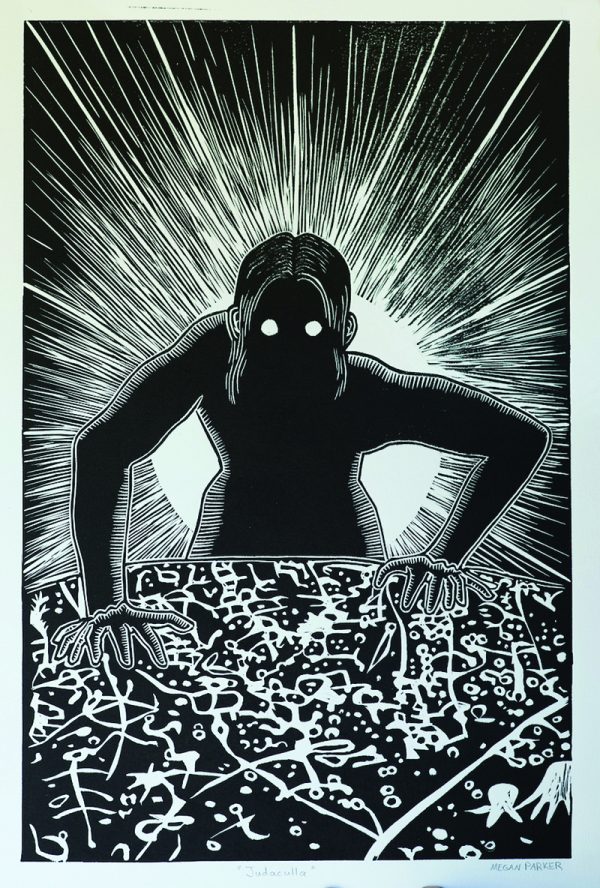 CULLOWHEE – A 15- by 17-inch linoleum print created by an artist who grew up near Jackson County’s famed Cherokee petroglyph Judaculla Rock was declared the first-place winner in the recent Judaculla Art Competition sponsored by Western Carolina University’s Cherokee Center.

The winning artist, Megan Parker, now lives in Colorado, but she was born and raised on the property in the Caney Fork community where Judaculla Rock is located, said Sky Sampson, director of the Cherokee Center. 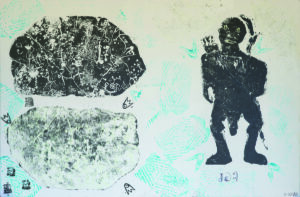 SECOND: Mike Crowe won second place in the contest with his Speedball linocut on canvas.

An important cultural site for the Cherokee people, Judaculla Rock is a large soapstone boulder that contains some of the best preserved petroglyphs (rock carvings) east of the Mississippi River. The theme of the art competition was centered around Judaculla Rock and a slant-eyed giant known as Judaculla, as described within Cherokee legend. Parker’s print depicts both the rock and Judaculla.

Mike Crowe of Cherokee won the second-place award for his Speedball linocut on canvas, and Stefanie Kompathoum of Hendersonville received the third-place award for her paper pulp painting. Other area artists submitting entries were Joy Hutcher, Haley Cooper and Ariyanna Tioneeta.

“Our overall goal in holding this art competition was to give artists in the area a reason to research Judaculla and its historical relevance for our area,” Sampson said. “Our hope is to place some of the artwork on the WCU campus in the university’s newly constructed facilities.” 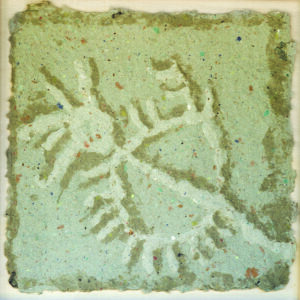 The artwork will be on display in Gallery 130 of WCU’s Fine Art Museum beginning in the fall.