Dr. Scott Penland is set to retire as superintendent of Cherokee Central Schools, and the Cherokee School Board announced his replacement on Tuesday, May 23.  Dr. Michael Murray, the current superintendent of Jackson County Schools, has been hired the take the reins.

“I am very excited to begin working for Cherokee Central Schools,” Dr. Murray said in a statement.  “It will be a privilege to work with the children on the Qualla Boundary to help them achieve their educational goals as well as the cultural aspects of their heritage and the curriculum.” 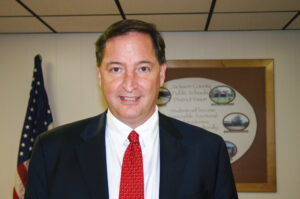 Dr. Michael Murray has been hired as the new superintendent for Cherokee Central Schools. (Photo by Jason Farmer/Sylva Herald)

According to information from Cherokee Central Schools, “Dr. Murray completed his B.S. degree at Mars Hill College in 1984, his Masters at WCU (Western Carolina University) in 1988, his Ed.S at WCU in 2005 and his Doctorate in Educational Leadership at WCU in 2008.  He is currently a part-time Assistant Professor of Educational Leadership in WCU’s Doctoral program and has been an adjunct professor at Mars Hill College.”

Dr. Penland said he is very pleased with the selection of his replacement.  “Dr. Murray has been successful in every position he has held, and I think he will continue that success here.  I will work closely with him for the next few weeks to ensure a smooth transition.  As I leave, I want nothing but the best for the students and employees of Cherokee Central Schools.”

Dr. Murray, who started his educational career as a science teacher at A.C. Reynolds High School, has been the Superintendent at Jackson County Schools for the past six years, and before that he served as assistant superintendent for six years.

Gloria Griffin, Cherokee School Board vice chairperson, commented, “The School Board would like to welcome Dr. Murray.  He brings a tremendous amount of knowledge and years of service as a superintendent, and we are so delighted to have him.”

Chelsea Taylor Saunooke, Wolftown School Board representative, said, “It is quite a blessing to bring someone like Dr. Murray on board. I have the confidence that he has the wealth of knowledge and strengths to take on the reigns of our school system effectively.”