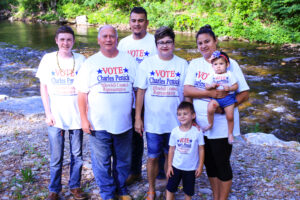 Siyo, and thank you for this opportunity to introduce myself as a Candidate for Yellowhill Tribal Council to you and once again to Yellowhill Community voters and interested Tsalagi people of the other communities constituting the Qualla Boundary. I am also a man of faith and a Christian man by the Grace of God.

My name is Charles Penick (Tsali Qunigi).  I am an enrolled member of the Eastern Band of Cherokee Indians and I am running for Tribal Council Representative in the Yellowhill Community where I have been a resident for the past eight years and of the Qualla Boundary where I was born in 1956. I attended Cherokee schools and joined the United States Army as a teenager to see the world, gain an education and improve my chances for prosperity in the future.

After serving more than twenty years of Active Duty I retired from the United States Army and became involved in Consulting work for the Department of Defense with several Fortune 500 companies such as Level 3 Communications and Booz-Allen and Hamilton where I held an above Top Secret level clearance and worked with projects involving such things as Joint Theater Air and Missile Defense that is so prominent in the news today.

I later returned home to the Qualla Boundary where I met and married my wife of eight years, the former Lisa Fowler. My wife Lisa recently retired from the Eastern Band of Cherokee Indians with twenty-eight years of service. Lisa and I both have children from a previous marriage. A daughter (Amanda Wolfe Moore) and son (Jackson Samuel Wolfe) in Lisa’s case and two daughters (Cheri Penick Hart) and (Erin Penick Windsor) in my case. Between us, we have a total of eleven grandchildren.

I am deeply committed to the growth and vitality of the Yellowhill Community and especially to that of the Eastern Band of Cherokee Indians. At the heart of this is a belief that through hard work, cooperation and dedication to a common cause we can build the economic underpinnings of the community which will serve us well in the future. This philosophy encompasses all the Yellowhill Community and the EBCI through a diversified economic and business structure that focuses on the future wellbeing of our Tribe and its most important resource, our children.

Every business and enterprise which pays taxes (Tribal Levy) and employs workers and attracts shoppers to our communities helps to support the public services which are essential to our Tribe and serves to stimulate development in the surrounding communities outside the Qualla Boundary that serve as a peripheral benefit to Tribal members as well in the form of increased availability of amenities. This is important for our People and to the development of goodwill with surrounding Governments and entities.

We are heavily dependent upon Gaming Revenue to sustain services and employ our People. Therefore, anything we do that draws monies and investments to the Qualla Boundary helps improve our Tribe and sustain our People and I am greatly in favor of finding ways to reduce our dependency upon Gaming Revenue as the sole source of our revenue generating operations.

To this end we must develop new strategies that incorporate Risk Sharing, Joint Ventures and other such business tactics with credible Local, State or Private entities and Partners in credible and viable business opportunities, and engage them on a proactive basis, such as the State of Tennessee for example.

Further, the Services which are provided to our Tribal members as a function of our Tribal Government must be improved in Quality and Scope. This is self-evident through the lack of timely and effective Housing for our People and also through the use of old, dated and frankly “poor” methods for delivery for these Services.

Additionally, we must improve and “flesh out” our governing mechanisms and institutions.  Refine and reform our Laws and Codes and better define the role and powers of various portions of our Government structure. Corruption and inefficiencies cannot be let stand. These things exist in any Government to one extent or the other and they cannot be tolerated in our Tribal Government. As a Tribal Council Representative, if elected, I certainly will not tolerate such things. Honesty and hard work have been the hallmarks of my life and it is my intention to continue to practice and cherish those qualities for the remainder of my life.

Recent events have led me to believe that the expressed “Will of the People” has been disregarded, downplayed or diminished by those in power to suit their own purposes or by the whim of elected officials has been ignored entirely. It is for this reason and many others that I prayed about and decided to enter the race for Yellowhill Tribal Council Representative.

I will vote as the majority of the People would have me vote in Council and I will serve the People as Faithfully and Honestly as I might to further the Principal People’s collective interest over everyone else’s interest including my own.

Some of the key elements of my platform are:

Priorities associated with these key elements include:

All of these things are possible. All of these things can be done. But they can only be done through hard work, change and perseverance. You might say to your friends and neighbors that your vote “doesn’t count”, that it won’t “make a difference”, that it will be “the same old people doing the same old thing”. Well, it will be if you permit it. So, come out and vote! Vote for Charles Penick for Yellowhill Tribal Council Representative and lets start this work of change together in September.

Thank you to my Lord and Savior Jesus Christ for my life and thank you for your time and your vote!