The top athletes of Cherokee High School for the 2016-17 school year were honored during a banquet at the Chestnut Tree Inn on Sunday, May 21.  Tye Mintz, football and basketball standout, was given the James “Hogeye” Taylor Male Athlete of the Year award, and Shelby Wolfe, basketball and track star, was given the Bertha Saunooke Memorial Female Athlete of the Year award. 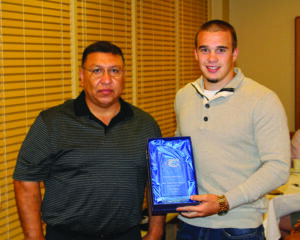 Anthony Toineeta was awarded the inaugural CHS Champions Award in recognition of being a two-time state wrestling champion.  He is set to continue his wrestling career next year at Queens University in Charlotte.

“We’ve had a good year, but here at Cherokee High School, we’re shooting for great years,” Peanut Crowe, CHS athletic director, said to open the event adding that the school is continuing to raise the bar in its athletic endeavors.  “We want to have state championship after state championship.”

He added that it takes many people to make a successful program.  “We couldn’t do it without the parents and the fans.  You don’t realize how important you are.” 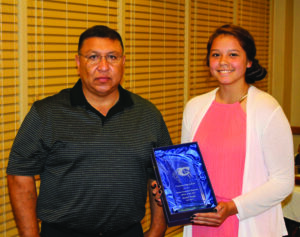 Noland Crowe, Cherokee High School’s first state champion (wrestling), spoke during Sunday’s event and admonished the athletes to live a good life and encourage their fellow students.  “When you’re an athlete at Cherokee High School, you’re a role model for the rest of the student body.”

Other awards given during Sunday’s banquet included:

Winter and spring sports awards were given during a ceremony held Tuesday, May 16 as follows: