Cherokee High School has announced its top two students for the Class of 2017.  Richard James Smith has been selected as the valedictorian and Kendra Ayanna Panther is the salutatorian.  They will be honored and give their addresses during the Commencement Ceremony planned for Saturday, May 27 at 10am in the Charles George Memorial Arena.

Smith, 18, of the Wolftown Community, is the son of Nicolasa Torres.  He participated in the CHS Chapter of HOSA (formerly Health Occupations Students of America) for two years. 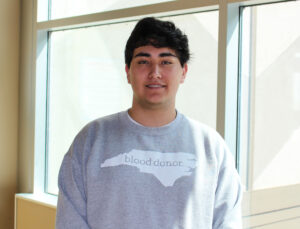 VALEDICTORIAN: Richard Smith, of the Wolftown Community, has been named the CHS Class of 2017 valedictorian. (SCOTT MCKIE B.P./One Feather photos)

“I was kind of shocked,” said Smith who related he will attend Western Carolina University for his undergraduate work with the goal of entering medical school in the future.

Panther, 17, of the Birdtown and Big Cove Communities, is the daughter of Jennifer Wildcatt and Delano Panther.  She participated for two years in both varsity cheerleading and varsity basketball.  In addition, she was also in the National Honor Society, the CHS Travel Club, and the CHS Chapter of HOSA.

“I was shocked, at first, but my mom had always told me, ‘push yourself as much as you can because your high school years are the most important years of your life’,” said Panther.  “So, I did.”

School officials related to her at the end of last year that she was within one point of the top.  So, she kept working.  “It makes me happy that I pushed myself so hard and that hard work paid off for me.  And, here I am, second in my class.”

Panther has been accepted at the University of Alabama in Tuscaloosa, Ala. where she plans to study elementary education.  “I want to come back and teach at Cherokee.” 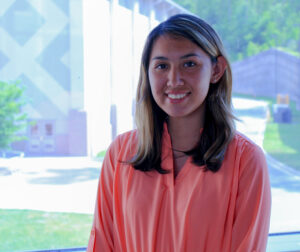 SALUTATORIAN: Kendra Panther, of the Birdtown and Big Cove Communities, has been named the CHS Class of 2017 salutatorian.

She has very fond memories of her time at Cherokee and commented, “I just enjoy how much of a family my class is.  We help each other out with anything.  We’re always there for each other.  I’ve had some good teachers who were there to push me through some things.  And, one of my best memories would have to be cheerleading – cheering on the Braves each Friday night and feeling the atmosphere.”