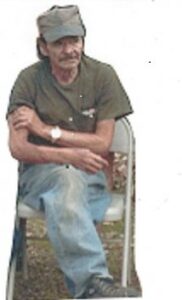 Perry was well known in the Big Cove Community by his sense of humor and his many forms of transportation.